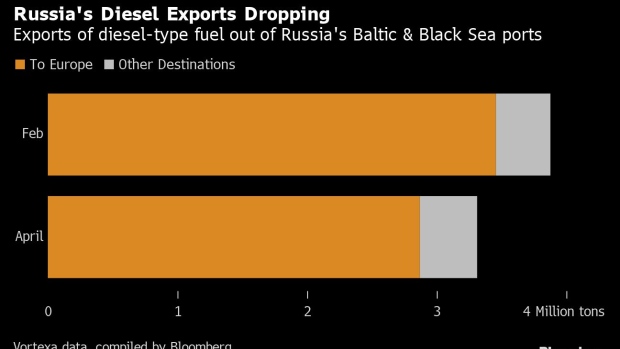 (Bloomberg) -- Diesel exports from Russia fell sharply in April from their prewar level as oil buyers seek to punish one of the world’s biggest suppliers.

Shipments of diesel-type fuel out of Russia’s Baltic and Black sea ports were about half-a-million tons, or 14%, lower last month than in February -- the last few days of which marked the beginning of Russia’s invasion of Ukraine, according to data from Vortexa Ltd. Three people involved in the diesel market reported falls of a similar magnitude.

The global diesel market already is extremely tight, and Russia is a major supplier. Last month’s drop in exports may not be as significant as some expected, but two people involved in trading diesel expect May’s shipments to decline even more. The European Union’s proposed sanctions also could significantly hamper future trade-flows if implemented.

“The largest decrease can be seen from the Black Sea ports as self-sanctioning starts to kick in by certain European countries,” said Pamela Munger, senior market analyst at Vortexa. “The UK, France and Italy have all reduced imports of Russian diesel.”

The diesel exports were 3.32 million tons in April, compared with 3.88 million tons in February, according to Vortexa data. Two people involved in the diesel market reported similar differences of about 500,000 tons between these two months, while a third saw a slightly bigger drop.

Exports from Primorsk -- Russia’s main port for shipping diesel abroad -- are set to drop by about 30% this month, according to loading plans seen by Bloomberg. Rosneft PJSC, normally one of the larger suppliers, is notably absent from the May list.

The U.S. banned imports of Russian oil, and the U.K. pledged to phase them out by year’s end. Many European companies also are shunning Russian energy.

While some European countries have reduced imports of Russian diesel, others -- most notably the Netherlands and Turkey -- have ramped them up, Munger said. One ship carrying Russia-loaded diesel, the Sunny Liger, recently was turned away from multiple ports in northwest Europe and now is sailing toward Gibraltar.

Dealing in Russian oil is set to become much harder starting May 15 as EU sanctions kick in, according to Vitol Group, the world’s biggest independent crude-oil trader. The EU also proposed banning Russian crude oil during the next six months and refined fuels by early January.