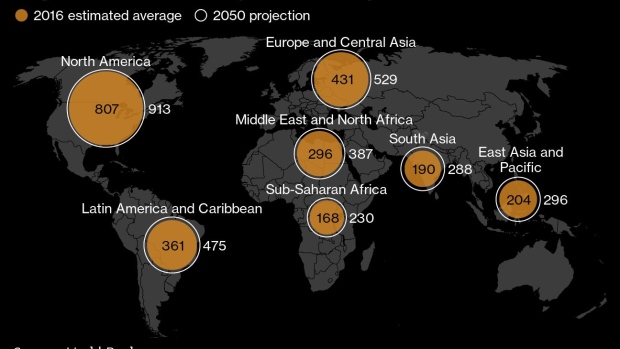 The World Economic Forum’s annual meeting dominated economic coverage this week, and in the Swiss mountain resort of Davos itself, climate change was the No. 1 issue.

Our stories on climate change, a topic that German Chancellor Angela Merkel terms a “matter of survival,” are among the collection of this week’s analysis, scoops and enterprise from Bloomberg Economics:

Trade tensions flared up again between the U.S. and Europe as transatlantic allies jockey for position to start a big year of negotiations. The U.K. and European Union have their post-Brexit relationship to hammer out, while the Trump administration also wants to start rewriting its deals with the EU and Britain. Peter Coy investigates how Trump’s upending of global trade may endure after he’s gone. Economists Maeva Cousin and Tom Orlik crunched numbers to see which countries are most likely to lose orders from China as a result of that nation’s $200 billion commitment to buy from the U.S.

The outbreak of a new respiratory virus could put China’s fragile economic stabilization at risk if authorities fail to contain its spread, economists have warned. It also threatens the tourism-reliant Thai economy, among others.

The European Central Bank kicked off the first rethink of its policies since 2003, though Christine Lagarde was guarded on her views of what is needed. Malaysia followed Turkey and South Africa by cutting interest rates and the central bank chiefs of those two countries were both in Davos, elaborating on their easing policies. On Friday, the economy is set to take center stage at the forum with Lagarde and Bank of Japan Governor Haruhiko Kuroda starring in one of the event’s closing panels.

And finally, teenagers aren’t being imaginative enough with their ambitions, aspiring to jobs traditionally rooted in the 20th century for their future careers, according to the OECD.

--With assistance from Brendan Murray.

To contact the reporter on this story: Zoe Schneeweiss in London at zschneeweiss@bloomberg.net

To contact the editors responsible for this story: Simon Kennedy at skennedy4@bloomberg.net, Craig Stirling, Ana Monteiro