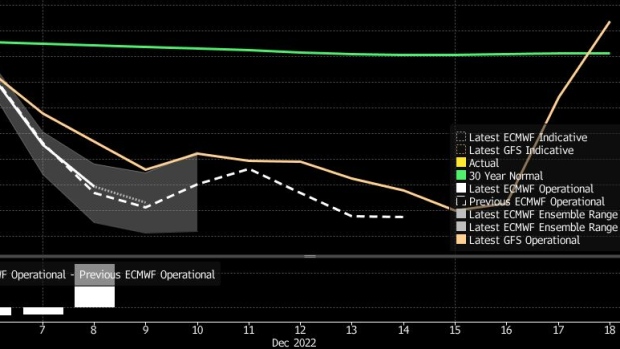 (Bloomberg) -- Temperatures are expected to plummet below freezing from Britain to the Nordics this week, boosting energy demand and testing the region’s ability to withstand a cold winter.

A chilly Arctic maritime airmass is likely to drive temperatures to as low as -10 Celsius by the end of the week in the UK, potentially with some snow and wintry showers in the south, the Met Office said Monday. It also issued a yellow weather warning for snow on Wednesday in northern Scotland, with some roads and railways likely to be affected.

Below average temperatures are also expected in continental Europe, with Stockholm at 7.5 Celsius below normal on Thursday, according to Maxar Technologies Inc. London is set for a minimum of -2.5 Celsius on Friday, as much as 7.4 degrees below the seasonal average.

The first cold spell of the season will put pressure of the region’s fragile energy systems as households crank up the heating. Gas storage sites across Europe that were filled to the brim following a milder-than-normal autumn could be depleted by a prolonged bout of chill.

Parts of southern Europe, however, are expected to be milder in the coming week, with forecast temperatures of 5.1 Celsius in Rome on Friday.