Why Robinhood investors have an outsized impact on the market

Are you young, newly rich from stock trading and ready to take the plunge in options? Wall Street is following your every move.

With the sway of stay-at-home traders growing and starting to eclipse other influences on equities, figuring out who is doing what among amateur stock dabblers has become a critical mission for big investors. They’re canvassing Reddit threads like r/wallstreetbets and picks at retail brokerages, plugging data into programs and trying to gain an edge.

While alternative data has been a buzzword for years, demand has exploded in 2020. First it was COVID-19 infection charts and travel and dining trends. Now it’s intel on what retail investors are doing with their cash. As their heft in markets has grown, individuals have morphed into a force Wall Street can’t afford to ignore.

“When you see episodes in the market, heavy bouts of buying or selling, it’s important to know where they’re coming from and why,” said Quincy Krosby, chief market strategist at Prudential Financial Inc., who admits she checks sites like Twitter.com often to gauge retail trends. “Ultimately, retail investors have an effect on the market.” 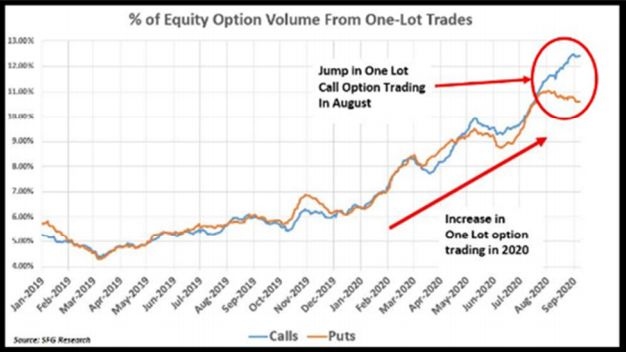 Lured by zero fees and probably boredom while stuck at home during the pandemic, retail investors have flocked to stocks. They now account for 20 per cent of equity trading, according to an analysis by Bloomberg Intelligence’s Larry Tabb, making them the second-largest group of investors in the market.

Not only are they trading cash equities, they’ve also become a formidable presence in options, where frenetic buying forces dealers to hedge, whipping up stocks further. Amid significantly higher options volume generally, one lot trades -- smaller ones often done by retail clients -- have more than doubled to 12 per cent of total options volume in 2020, according to Chris Murphy, Susquehanna International Group’s co-head of derivatives strategy.

“In terms of how important is that flow? It’s twice as important. It’s significantly more important,” Murphy said by phone.

Signs of retail interest abounded for Tesla Inc., including at Robinhood, as early as July before the shares staged an 80 per cent run. A Goldman Sachs basket of stocks most popular with individual investors is up 40 per cent this year and has surged 90 per cent since March lows, more than the price gains for both the Nasdaq 100 and the S&P 500.

“There are influencers within that community that will say, ‘Alright, today we’re buying the Tesla US$2500 calls for next Friday,’ and the volumes that will print are huge,” Eifert said in an interview on Bloomberg’s Odd Lots podcast. “And you better believe that the most sophisticated options players in the world -- the Susquehannas and Citadel Securities -- are extremely focused on this flow and predicting it in real-time.”

There are plenty of examples of websites and platforms that attempt to scan r/wallstreetbets to create alert systems. A page on Medium.com -- an online publishing platform -- is dedicated to “Momentum Trading off Sentiment from r/wallstreetbets.” A blog post on a website called algotrading101.com reads “Web Scraping Tutorial – Reddit Data for Finance.”

“We have plenty of people that have tried to leverage Wall Street Bets in some form or another for opportunity, for profit,” said Jaime Rogozinski, the thread’s founder. “Some shady, some legal, some blatantly illegal.”

As an institutional sales trader, Susquehanna’s Murphy tracks retail trends in options and supplies it to clients, alongside other research. He tends toward classic market data, and based on trading volume and size, he’s able to tell if retail flow is flooding in. In the past, before website Robintrack.net -- which provided hourly updates on retail stock demand -- was forced to shut when the Robinhood investing app curtailed access to data, he’d sometimes use the site to confirm his suspicions.

“You can’t look at Robintrack anymore, but usually I would be more likely to reverse engineer it. I pull up Robintrack just to confirm, ‘Ah, yeah, it’s number five, or it’s moving up,’” Murphy said. “You could try to go the other way, but not having Robintrack now makes it a little bit more difficult.”

When it was live, Robintrack attracted hedge funds and other large financial firms that were interested in aggregating the site’s data. The website, built in three months as a college side project, may no longer exist in an up-to-date form, but that hasn’t deterred large professional players from tracking retail investment decisions. Rather, they’re getting more creative.

--With assistance from Tracy Alloway, Joe Weisenthal and Claire Ballentine.