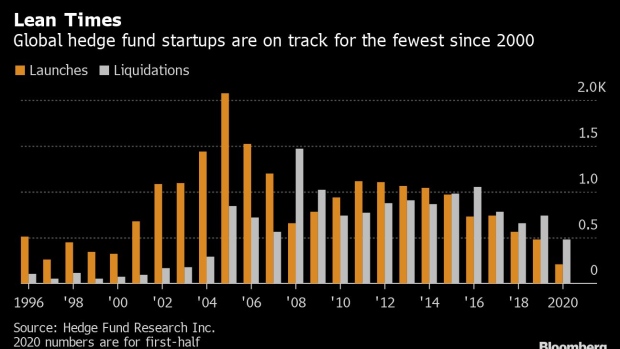 (Bloomberg) -- Established Asian hedge funds have attracted the lion’s share of new money this year, while startups have been hamstrung by global travel curbs that have made it impossible for face-to-face meetings with European and U.S. asset allocators.

Well-known firms including Tribeca Investment Partners Pty, Pleiad Investment Advisors Ltd., Dymon Asia Capital (Singapore) Pte. and Sylebra Capital have drawn more than $3 billion of new money among them this year. That contrasts with the net $3.1 billion that flowed out of regional funds in the first eight months of 2020, according to Eurekahedge Pte. Meantime, the median raising for new Asia funds this year is just $20 million.

“Asset raising has been possible this year, but it has been materially more challenging,” said Matthew Whitehead, chief operating officer of Hong Kong-based Sylebra.

Among funds that have attracted new money:

With a shortage of local institutional allocators to hedge funds, Asian managers rely on U.S. and Europe sovereign wealth funds, university endowments, charitable foundations and pensions for stickier money. That makes them particularly vulnerable to the Covid-19 travel restrictions.

About 73% of investors in a recent Credit Suisse Group AG survey anticipated no travel for the rest of the year to research and conduct due diligence on hedge funds. Just 30% of them are able to invest without on-site visits. An additional 42% could allocate money without face-to-face meetings only if certain conditions are met, such as familiarity with the investment team.

The new money tends to concentrate in two groups of managers: those who have a proven track record of performance, and the so-called platforms whose multitude of investment teams enable them to generate stable returns.

Dymon, which is returning money from its flagship macro fund to focus on a multi-strategy fund, has gathered $1.6 billion for the new fund and expects a further $1 billion in coming months, the firm said in September.

New offerings also give investors an opportunity to gain access to, or top up money with, star managers who have restricted inflows into older funds. Some firms have started, or plan to set up, funds that only place bullish bets as short-selling opportunities in the region are relatively limited. Those aren’t captured in the Eurekahedge data.

More are in the pipeline. CloudAlpha Capital Management, whose fund returned 135% in the first eight months of the year, is starting a new fund that takes more-concentrated long and short bets on global tech stocks.

“In this current phase, investors will be making fewer investments, initial investment sizes will be smaller and will build slowly,” Sylebra’s Whitehead said.