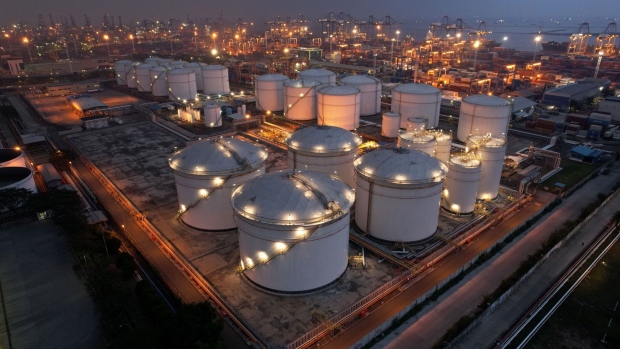 Fuel storage tanks at a PT Pertamina facility at Tanjung Priok Port in Jakarta, Indonesia, on Monday, Dec. 5, 2022. Pertamina is looking to buy crude for the February arrival to its Cilacap refinery, according to a tender document seen by Bloomberg. Photographer: Dimas Ardian/Bloomberg , Bloomberg

(Bloomberg) -- The world’s biggest oil producers are spending billions of dollars on fossil fuel projects that will only be needed if the world misses key climate goals, according to Carbon Tracker, a nonprofit think tank.

Companies invested $58 billion in oil and gas projects in 2021 and 2022 that will only be required if fossil fuel demand grows to a level at which scientists forecast a “climate catastrophe,” the London and New York-based researcher said in a report. They may pull the trigger on a further $23 billion of investments next year that would help warm the planet more than 2.5 degrees Celsius above preindustrial levels, said the report, titled “Paris Maligned.”

Big Oil’s capital spending on new projects has become a crucial balancing act. Investing in long-term projects bolsters energy security at a time when state producers like Russia have shown willingness to weaponize their supplies but can also lock in emissions for decades to come, furthering the risk of irrevocable climate change.

“Investors must scrutinize company spending plans as investments in many new oil and gas projects lock in future emissions that are incompatible with Paris,” report co-author Mike Coffin said in a press release in reference to the Paris Agreement on climate change.

Most international oil companies have cut their long-term capital spending plans since the pandemic as they focus on returning cash to investors over new production.

Exxon is due to publish its capital budget for next year on Thursday. Chevron Corp. said on Wednesday it will allocate an extra $2 billion to capital spending next year at $17 billion.