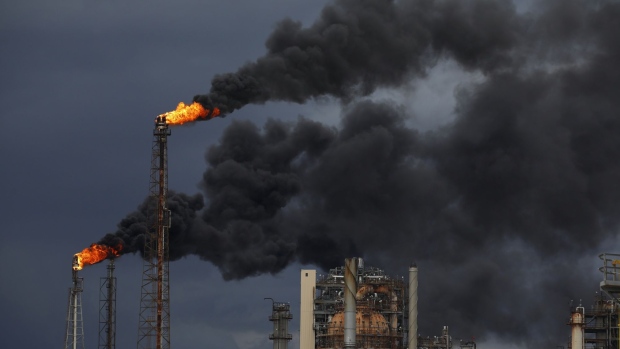 The House of Representatives’s Oversight and Reform Committee plans to quiz executives about what they knew about the causes of global warming and when, and whether they worked to undermine climate-protection efforts. The range of questioning is expected to span everything from internal corporate discussions, public-relations campaigns and the bankrolling of think tanks and lobbyists.

“These oil companies pay lip service to climate reforms, but behind the scenes they spend far more time lobbying to preserve their lucrative tax breaks,” U.S. Representative Carolyn Maloney, the New York Democrat who chairs the committee, said in a release. “We will demand accountability from Big Oil for their role in fueling the climate crisis and deceiving the public, and we will urge the industry to finally take meaningful action to rein in emissions from fossil fuels before it is too late.”

The probe comes as President Joe Biden struggles to keep key climate policies in his spending bill, which is crucial to implementing the infrastructure goals that were a cornerstone of his campaign. Moderate Democrats and Republicans are blocking large portions of Biden’s climate efforts amid deep divisions within his own party ahead of a key climate summit in Glasgow begins next week.

As such, Democrats are keen to use the hearing to ramp up public pressure on the fossil-fuel industry in the hopes of getting stronger climate provisions passed.

“For the first time in history, the industry will have to answer to Congress and the American people about its climate disinformation efforts,” Representative Ro Khanna, a California Democrat, said on Twitter.

It will be the first time since BP’s Gulf of Mexico oil spill more than a decade ago that top industry executives have appeared together before lawmakers in the nation’s capital. Campaigners hope they can tease out statements that will help turn public opinion and aid lawsuits against fossil fuels as happened with Big Tobacco in the 1990s.

Gretchen Watkins, president of Shell’s U.S. unit, noted in written testimony submitted prior to the hearing that as early as 1991 the corporation was raising concerns about climate change and created an educational film on the topic for schools and universities.

The hearing comes four months after an Exxon lobbyist was caught on camera by Greenpeace suggesting that the oil giant joined “shadow groups to work against some of the early efforts” on climate change. He also described how Exxon pushed to dilute climate provisions in Biden’s infrastructure legislation, preserve tax breaks for fossil-fuel companies, and only supported a carbon tax because it knew such a policy would never happen.

Exxon’s Chief Executive Officer Darren Woods apologized for the comments and said they did not represent the company’s climate policies.

Last month, lawmakers requested documents and internal communications related to climate disinformation but “to date all the fossil fuel entities have failed to adequately comply with the Committee’s request,” the committee said on its website.

(Updates with comment from committee chairwoman in third paragraph)