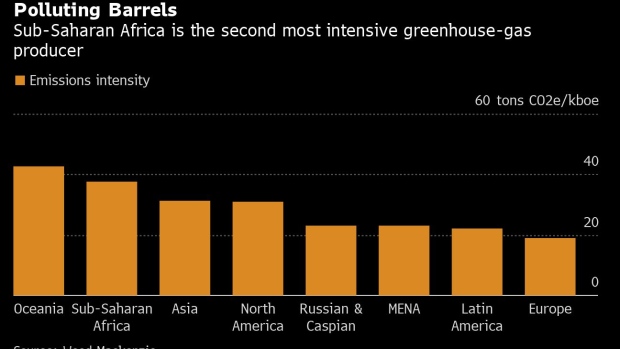 (Bloomberg) -- Oil majors need to curb emissions in sub-Saharan Africa -- where almost half of their most polluting assets are located -- as investors demand greater efforts to slash carbon output, according to Wood Mackenzie Ltd.

Crucially, the companies must reduce gas flaring -- the process of burning off gas pumped out with oil -- and pollution from new liquefied natural gas plants, the U.K. consulting firm said in a report. While the region accounts for just a fraction of global oil and gas emissions, on a per-barrel basis it’s second only to Australia as the most intensive greenhouse-gas producer, WoodMac said.

Much of the focus is on natural gas, with new LNG plants being built from Senegal to Mozambique. While gas has been seen as a key transition fuel in the global shift to cleaner energy, many investors are increasingly questioning its future in a greener world.

“LNG liquefaction will account for a third of all emissions” as sub-Saharan Africa expands capacity in the next 10 years, WoodMac said. “Plants need to be more efficient and emissions will need to be offset.”

Flaring is also rife in the region due to insufficient infrastructure for processing the fuel and a lack of local markets for it in some countries. While Nigeria has reduced the practice by 75% since 2005, “persisting commercial constraints will make elimination tough,” the analysts said.

In cleaning up their act, companies need to consider a range of changes to their operations and strategy, including offsetting or capturing emissions and diversifying, according to the report.