Fresh from striking a hammer blow in the boardrooms of the world’s biggest oil companies, the climate movement has a clear message: the energy transition is happening and there’s no turning back.

Just five years ago, environmental activists were limited to waving placards outside of annual meetings and to the odd shareholder proposal, inevitably rebuffed by the boards and management teams. On Wednesday by contrast, stock investors ousted two Exxon Mobil Corp. directors seen as insufficiently attuned to the threat of climate change, while Chevron Corp. shareholders voted for a proposal to compel the company to reduce pollution by its customers. Royal Dutch Shell Plc was ordered to slash emissions harder and faster than planned by a Dutch court.

It was a humiliating loss for Exxon, the Western world’s biggest oil company, made worse by the fact that the the effort was championed by an activist with just a 0.02 per cent stake. Chief executive officer and Chairman Darren Woods battled against the tiny fund for weeks, calling its nominees “unqualified,” and offering concessions just hours before the annual meeting. The board even held up the vote in a last-ditch attempt to secure more support.

It was to no avail. The climate movement is now so mainstream that the world’s largest institutional investors were willing to back Engine No. 1, a group of little-known activists who only established their fund six months ago, over one of the biggest titans in corporate America. BlackRock Inc., the second-largest holder of Exxon with a 6.6 per cent stake, voted for three of the four new directors nominated by Engine No. 1, according to a vote bulletin published Wednesday. The asset manager said it was “concerned about Exxon’s strategic direction” and could benefit from the addition of the new directors.

“It’s a big deal for Exxon, but it’s a watershed moment for the oil and gas industry,” said Fred Krupp, president of the Environmental Defense Fund. “It’s no longer tenable for companies like Exxon Mobil to defy calls to align their business strategies with decarbonizing the economy.”

Tuesday’s events mark a rude awakening for Big Oil’s powerful executives, who long marched to the beat of their own drum, with little need to take advice from shareholders on how to run their businesses. For much of the decade before the 2014 oil crash, energy companies were among the biggest cash cows in the stock market and the cornerstone of most major pension funds.

At the heart of their power was one iron-clad macroeconomic rule of the last half-century: the developed world’s thirst for energy was growing, and Big Oil had it. But in the past decade, the U.S. shale revolution and the climate movement disrupted that trend from the supply and demand sides, respectively.

For too long, Exxon -- and to a large extent, its rivals -- missed them both. 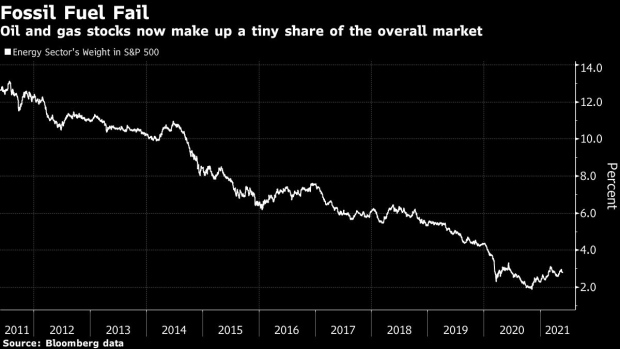 It wasn’t just that the supermajors were late to shale, but that they failed to appreciate what the massive new supply meant for the global crude market. From 2008 to 2014, the world was moving from a perceived shortage of oil to an abundance of it. But as old fields in Texas were being revived by fracking, Big Oil continued to pursue capital-intensive projects in the Arctic and Canada’s oil sands.

This not only damaged financial returns over the long term, but it also put Exxon and its peers firmly in the crosshairs of a movement that was increasingly targeting corporate America.

“The link between climate change and financial investments are undeniable,” said Aeisha Mastagni, a fund manager at California State Teachers’ Retirement System, the second-largest U.S.-state pension fund and an early backer of Engine No. 1.

While the environmental activist movement has been successful in targeting Big Oil and its allies, it has not yet solved the far bigger problem of tackling the world’s consumption of crude. Exxon, Chevron, Shell, BP Plc and Total SE together produce less than 15% of global crude supply. Even if they retreat, others may step in to fill the gap unless consumers are willing to make some hard choices about their lifestyle.

Even compared with its peers, Exxon has long been a lightning rod for criticism. Former CEO Lee Raymond vociferously opposed the 1998 Kyoto Protocol, one of the first globally coordinated agreements to reduce carbon emissions, citing the “uncertainty” around climate science. While the company’s stance evolved over time -- it backed the 2015 Paris Agreement -- under Woods it still clung to the belief that demand for oil and gas would persist, and that Exxon would be the one to supply it.

The difference between the American oil titans and their rivals in Europe grew wider over the last few years when Shell, BP and Total committed to net zero emissions targets by mid-century. In 2020, Woods famously dismissed these targets, some of which rely on asset sales, as a “beauty competition” that would do little to halt climate change. Later that year, internal Exxon documents leaked to Bloomberg News revealed that Woods’s US$200 billion, seven-year expansion plan was projected to increase annual emissions 17 per cent by 2025, equivalent to the entire output of Greece.

The coronavirus pandemic forced Woods to reverse course on much of his expansion plan, cutting capital spending by about a third all the way out to 2025. But by then the damage was done. Exxon’s debt ballooned 40 per cent to around US$70 billion in 2020, and it posted its first annual loss in at least four decades, incurring the biggest writedown in its modern history. The company was also removed from the Dow Jones Industrial Average. 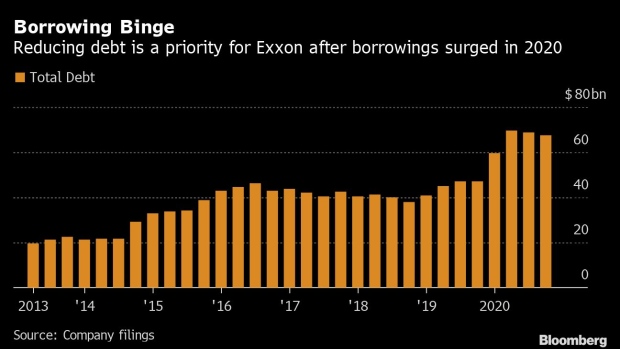 Exxon’s financial performance may have been the impetus for Engine No. 1’s campaign, but it was the company’s environmental record that loomed large over the actual vote. Environmental, social and governance investing has gained increasing importance within the country’s biggest asset managers, due in part to demand from climate-conscious clients.

Vanguard Group, BlackRock and State Street Corp., Exxon’s top three investors, are all members of the Net Zero Managers Initiative, which supports the goal of eliminating net greenhouse gas emissions by 2050. The CEOs of BlackRock and State Street have are keen to paint themselves as catalysts for energy transition as they themselves become targets of environmental activism.

None of this was lost on Engine No. 1., which seized on investor discontent over returns and used it to amplify its criticism of Exxon’s unwillingness to adapt. “A refusal to accept that fossil fuel demand may decline in decades to come has led to a failure to take even initial steps towards evolution, and to obfuscating rather than addressing long-term business risk,” the activist said in a recent presentation.

To ease investor discontent, Exxon must separate the roles of CEO and Chairman and increase transparency over its future plans, according to Iancu Daramus of Legal & General Investment Management, a top 20 shareholder. The company also needs to set “ambitious emissions targets befitting an iconic company of this scale and stature,” he said.

Exxon did take a series of measures, such as publishing new emissions reduction targets, talking up new low-carbon technology ventures and buying more renewable power to fund its operations. But the company still appeared tone-deaf to investor demands.

“When we did meet with the company the executive management team does most of the talking,” said Mastagni of CalSTRS. “They were unwilling to listen to shareholder concerns.”