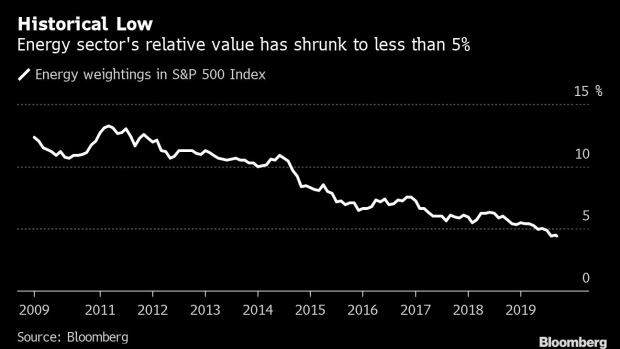 (Bloomberg) -- Shareholders of global oil giants will be “drowned” in cash from dividends and buybacks for the next 20 years as the firms shift their capital structure to finance renewable projects, according to Rystad Energy.

Majors such as Exxon Mobil Corp. and Chevron Corp. have traditionally had to hoard cash as they looked to their own balance sheets to fund billion-dollar megaprojects, founder Jarand Rystad said at his firm’s annual summit in Singapore. That will change as they gravitate to wind and solar projects, which tap debt markets backed by project financing for as much as 95% of their cost, he said.

The shift will create huge amounts of surplus cash that majors can return to investors as they increasingly tap pension funds and other lenders for lower-risk renewable projects, said Rystad. It underscores the massive changes oil and gas giants will need to undertake as they transition to wind and solar projects, the fastest-growing sources of energy.

“Shareholders will be drowned in capital paid back by energy majors in the next 20 years,” Rystad said. “Basically the whole energy sector needs to decapitalize and to increase leverage.”

Major oil companies are poised to do a record number of clean-energy deals this year, with Royal Dutch Shell Plc leading the pack, according to data compiled by BloombergNEF last month. So far this year, they’ve done about 70 deals in sectors including solar, wind and biofuels, close to surpassing the total for all of last year, the data show.

Investment in upstream oil and gas projects tends to be high-return but risky as the results aren’t always apparent at the outset. In contrast, renewable projects follow a model more closely aligned with utilities, in which power-purchase agreements with grids or end-users offer relatively low but guaranteed returns sought by banks and pension funds.

While owning a solar farm won’t provide the kind of returns attractive to Big Oil’s investors, these companies can tap their engineering and operational expertise to develop projects and sell them when they’re complete or de-risked, Rystad said. They can also find new profit streams closer to the end-user by adding bespoke services to the energy they provide, he said.

“Clearly Chevron and Exxon and everybody have ambitions to be an energy major 30 or 40 or 50 years from now,” he said. “Current energy majors are only 15% debt, but the future energy majors will be 85% debt. That’s why it will change the capital structure of the industry.”

A middle ground between the two can be found in the shale industry, Rystad said. Because shale development resembles manufacturing, with almost no dry holes encountered, and because companies can hedge their commodity price risk, its capital structure is about 30% to 50% equity, with the rest coming from debt, Rystad said.

“It’s natural for Big Oil companies to start to invest much more in shale, change their capital structure gradually and then go further into renewables,” he said.

--With assistance from Kelly Gilblom.