After one of the most difficult years in the oil industry’s history, crude prices have recovered and major producers are finally generating spare cash. Investors really want to get their hands on it, but most are likely to be disappointed.

That’s because the pandemic has created a legacy of debt for the world’s biggest international oil companies, many of which borrowed to fund their dividends as prices crashed.

For Exxon Mobil Corp. and Total SE, which bore the financial strain of maintaining shareholder payouts last year, any extra cash will go to easing debt. Chevron Corp. and Royal Dutch Shell Plc have said they want to resume buybacks, but not yet. Only BP Plc is dangling the possibility that shareholder returns could improve soon, after a year and a half of flip-flopping over its payout policy.

The coming week’s first-quarter results should show a significant improvement in both profit and cash flow after a dire 2020, but probably nothing that will change investors’ disenchantment with the oil majors. 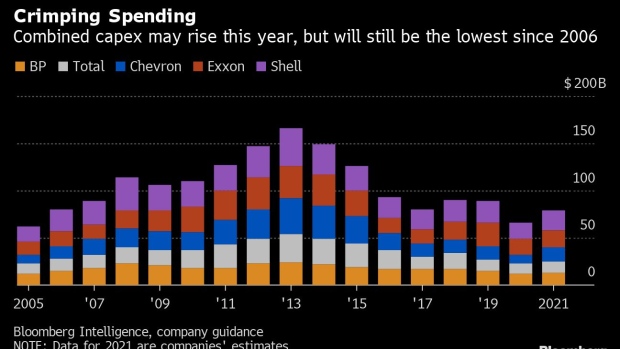 “They have limited appeal as long-term investments because they can’t demonstrate that they can deliver cash flow on a sustainable basis and return it on a sustainable basis,” said Christyan Malek, JPMorgan Chase & Co.’s head of EMEA oil and gas. “The key is consistency. We haven’t had any.”

The first quarter will be an inflection point for the industry, according to JPMorgan. Company data and estimates compiled by Bloomberg show free cash flow -- what’s left after operational spending and investment -- is set to rebound to US$80 billion for the five supermajors this year, compared with about US$4 billion in 2020.

Shell will be the top of heap with about US$22 billion, Exxon will total US$19 billion and even lowest-ranked BP will have about US$11 billion. That will be enough for each of the five majors to cover their planned 2021 dividends and together have more than US$35 billion left over.

It’s unclear how much of that could make it into the pockets of shareholders.

“Priorities for deployment of Europe’s oil majors’ strong first-quarter free cash flow will vary,” said Bloomberg Intelligence analyst Will Hares. “BP has achieved its debt target and is set to announce resumption of buybacks. Shell has announced a small dividend bump, though is unlikely to resume buybacks given its US$65 billion net debt target.”

After raising its dividend by 2.4 per cent in February 2020, then cutting the payout by half just six months later, BP has come under pressure to prove it can deliver reliable returns to shareholders.

The London-based firm’s shares are the worst performing in its peer group over the last 12 months. Even its Chief Executive Officer Bernard Looney has acknowledged that investors are questioning whether BP can pull off its reinvention for the low-carbon age.

Earlier this month, BP managed to set itself apart from its peers in a positive way, giving the clearest signal of impending buybacks. The company said it had achieved its target of reducing net debt to US$35 billion about a year sooner than expected and will give an update on the timetable for stock repurchases on Tuesday, when it opens Big Oil earnings season.

That’s a significant increase in the urgency of improving shareholder returns. Back in August, BP put its goal of returning 60 per cent of surplus cash to investors fifth on the priority list after funding the dividend, reducing net debt, shifting expenditure into low-carbon projects and spending on core oil and gas assets.

BP’s European peers, whose shares have performed better in the past year, aren’t moving so fast.

France’s Total, which was the only oil major in the region to maintain its dividend last year, has said that any extra cash that comes from higher oil prices will be used to cut debt. Its next priority will be to increase investment in renewables to about 25 per cent of its overall budget. Buybacks will only come after that.

Shell announced a 4 per cent increase in its dividend in October, after cutting the payout by two thirds earlier in the year. It has a target of reducing net debt by US$10 billion before it returns any extra money to shareholders. Banks including Citigroup Inc. and HSBC Holdings Plc predict that won’t happen until 2022, since net debt rose in the last quarter of 2020 to US$75 billion.

Unlike BP and Shell, the North American majors managed to make it through 2020 with their payouts intact, but at a high cost. Exxon’s debt pile surged 40 per cent during the pandemic to US$73 billion, prompting Moody’s Investors Service to downgrade the company’s bonds twice in the past 12 months.

The Texas-based giant expects to return to profit in the first three months of 2021 after four straight quarterly losses. The company has said it will maintain its US$15 billion annual dividend while paying down debt if oil and gas prices remain at current levels. JPMorgan sees Exxon’s free cash flow rebounding to US$19.6 billion this year, giving it a sizable surplus with which to reduce borrowings.

Of the five supermajors, Chevron has the best balance sheet and “strong prospects” for a share buyback, according to HSBC analyst Gordon Gray. The California-based company said in March that it should generate US$25 billion of free cash over and above its dividend through 2025 if Brent crude remains at US$60.

The oil majors’ focus on pleasing investors and healing their financial wounds comes largely at the expense of investment in their core business.

As the pandemic unfolded last year, the companies slashed their spending to the lowest combined level in 15 years, according to data compiled by Bloomberg Intelligence. The stranglehold will continue this year, with capital expenditure set to rise only slightly despite oil’s recovery.

Chevron and Exxon have both locked in spending plans at radically reduced levels all the way through 2025. Total has marginally raised its capital investment budget for this year, while BP and Shell have put a firm ceiling on expenditure.

So while the combination of higher oil prices, rock-bottom spending and asset sales is delivering the surge in cash flow that will help solve the supermajors’ short-term problems, it may be creating a long-term headache. Shell acknowledged earlier this month that it’s not investing enough in new projects to offset the natural decline in production from its existing oil and gas fields.

The majors are “slaking the shareholders’ thirst for cash returns,” said Russ Mould, investment director at AJ Bell. In the long term “capex cuts, debt and disposals could do as much if not more harm than good, and none are really sustainable.”

--With assistance from Francois de Beaupuy.