Big Oil is poised for a record-breaking US$50 billion profit in the second quarter, but the industry’s stellar performance could contain the seeds of its own decline.

The soaring earnings are direct result of the high energy prices that have stoked inflation, piled pressure on consumers, raised the risk of recession and prompted calls for windfall taxes. Amid this political and economic turbulence, shareholders may have to temper their expectations for rising returns.

“There’s a strong chance that earnings will peak in the second or third quarter, with a small decline thereafter,” said Ahmed Ben Salem, an analyst at Oddo BHF. “This looming recession is calming things down.” 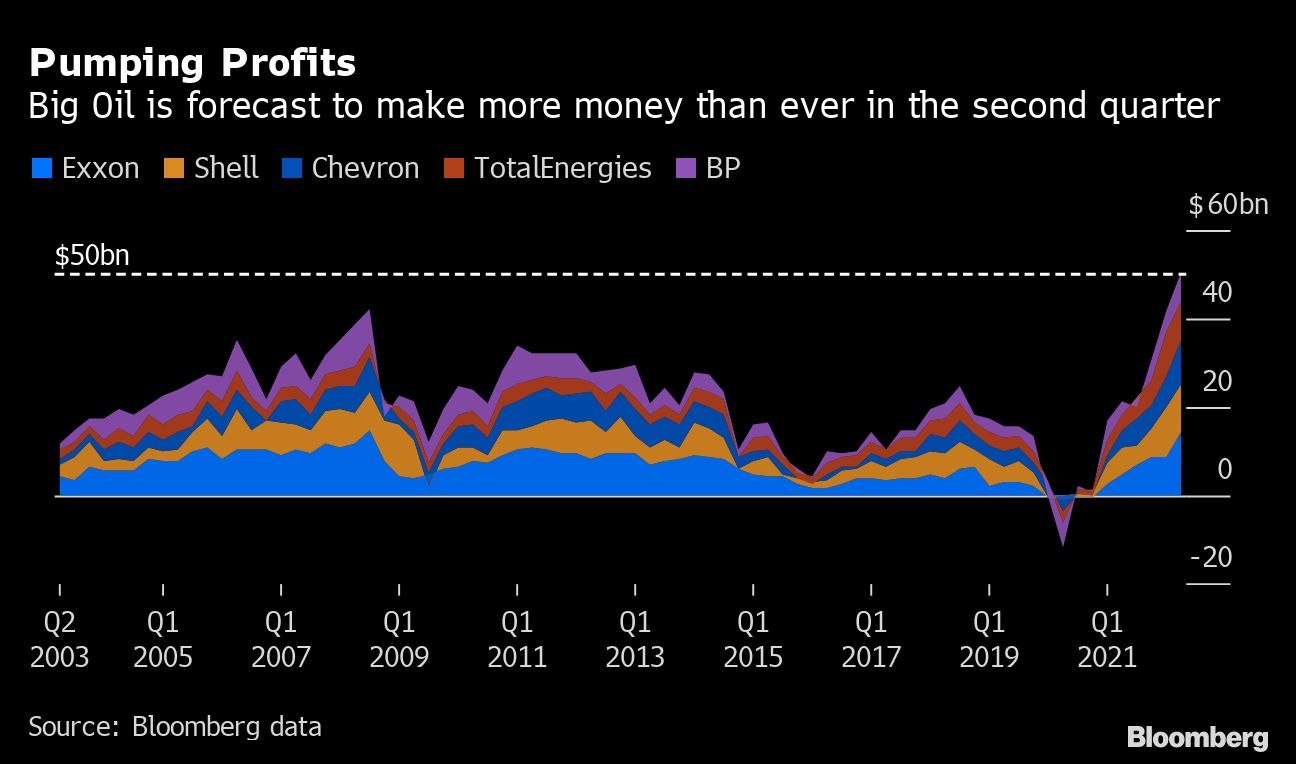 Exxon Mobil Corp., Chevron Corp., Shell Plc, TotalEnergies SE and BP Plc -- collectively known as the supermajors -- are set to make even more money than they did in 2008, when international oil prices jumped as high as US$147 a barrel. That’s because it’s not just crude that has soared during the crisis created by Russia’s invasion of Ukraine, natural gas prices and refining margins have also broken records. Exxon leads the pack with a 46 per cent  rise this year, while TotalEnergies is the worst performer, though still up 11 per cent  while the S&P 500 Index has dropped 17 per cent .

Many major markets have found themselves critically short of refining capacity due to a combination of shutdowns, investments that were stalled by the pandemic, sanctions on Russia and a decision by China to limit petroleum exports.

The US Gulf Coast’s 3-2-1 crack spread, a rough measure of profit margins from refining a barrel of crude, exploded to average US$48.84 in the second quarter, more than double the level a year-earlier. A similar measure for Europe -- TotalEnergies’ variable cost margin -- rose threefold to US$145.70.

Refining now makes up 26 per cent  of the cost of a gallon of gasoline in the US, up from an average of 14 per cent  in the previous decade, according to the Energy Information Administration.

Shell is expecting to post a US$1 billion gain in refining results. Exxon, which has the largest downstream footprint of the supermajors, is expected to make more in the second quarter than the previous nine combined, according to estimates collected by Bloomberg.

As a result, companies are seen being conservative despite soaring earnings. Exxon will probably use its excess cash to lower debt, according to Citigroup Inc. analysts led by Alastair Syme. Chevron may increase the bottom end of its buyback range to US$10 billion for the year, they said. 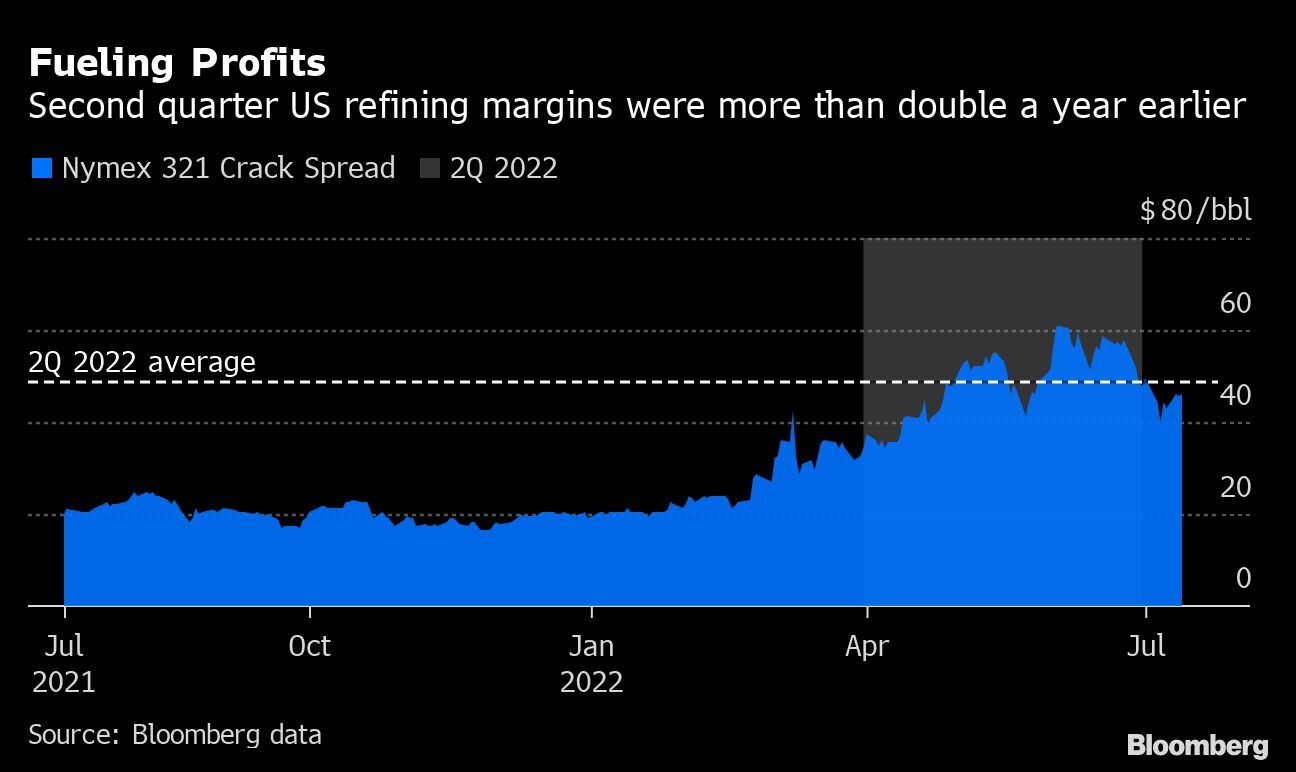 Sky-high profits aren’t solely the result of the broad-based upswing in commodity prices. The supermajors are also spending much less than they did the last time oil was above US$100 a barrel. Capital expenditures is creeping to a forecast of US$80 billion this year, but that’s half the level of 2013.

“Costs have been on a long, downward trend since 2014,” said Paul Cheng, a New York-based analyst at Scotiabank. “With commodity prices this good, it’s the perfect combination.”

That’s not necessarily the view of political leaders, such as US President Joe Biden, who are battling to contain rampant inflation and crippling consumer energy costs. Their pleas for the oil and gas industry to boost domestic production have gained little traction. Executives are cautious about how long high prices will persist and wary of committing to large fossil fuel projects that may become redundant as the world transitions to cleaner energy.

The supermajors may not be able to keep capital expenditure this low for long, due to their need to ramp up spending in an inflationary cost environment. Schlumberger NV, the world’s biggest oilfield service company, last week said sales increased nearly 20 per cent  from a year earlier, and sees a “multiyear upcycle” in demand for its services. 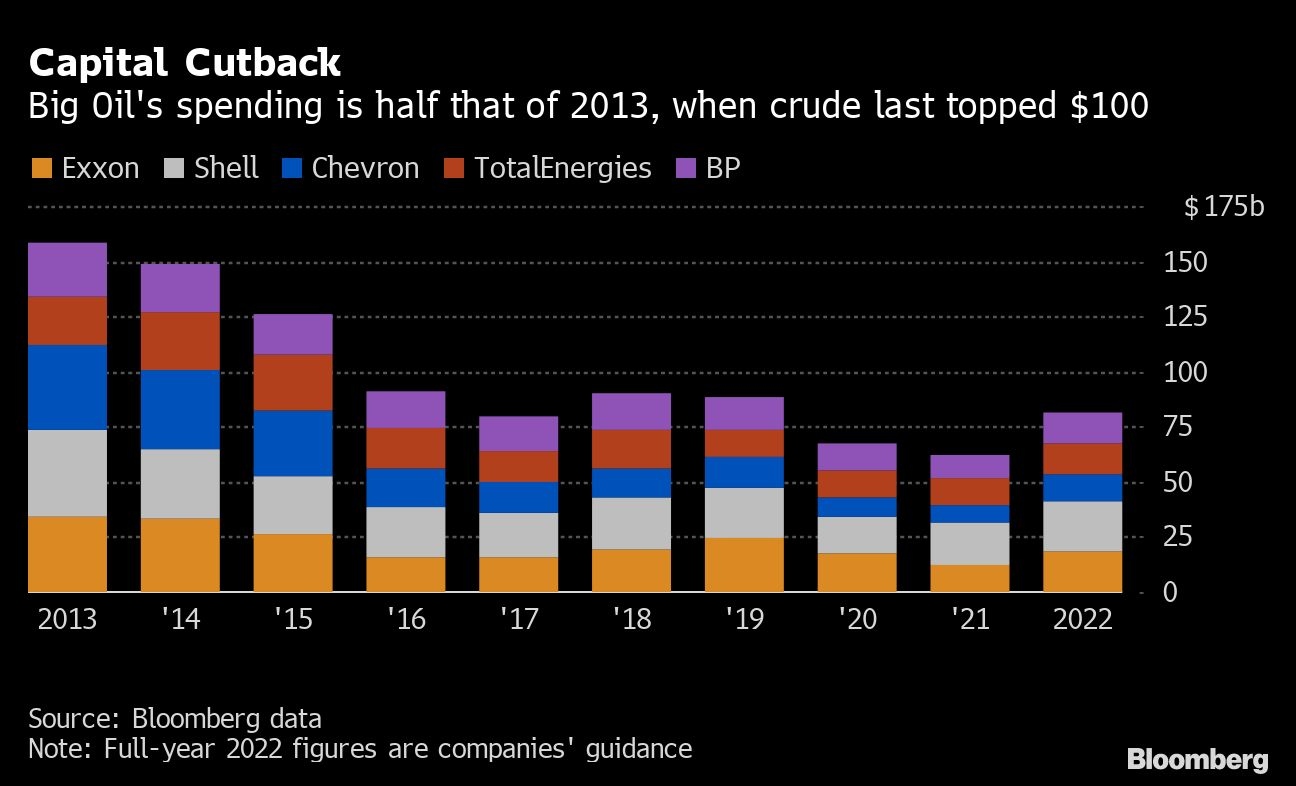 This situation risks a political backlash. The UK imposed a windfall tax on oil and gas profits earlier this month. Italy has passed a levy on the energy industry, while in France some lawmakers are backing the idea of a special tax of as much as 3 billion euros (US$3.1 billion) a year. President Emmanuel Macron has so far resisted such calls, instead urging companies including TotalEnergies to extend rebates on fuel purchases.

In the US, Biden has criticized Exxon for making “more money than God” and accused other oil firms of exploiting high gasoline prices, but so far there has been no serious political pressure for a windfall tax.

Against this turbulent backdrop, the most profitable quarter in the supermajors’ history may not be cause for overt celebration.

“Most of the companies in this quarter are going to report record earnings no question” said Scotiabank’s Cheng. “But with the potential for a severe recession and memories of 2020, I expect management teams to be conservative.”