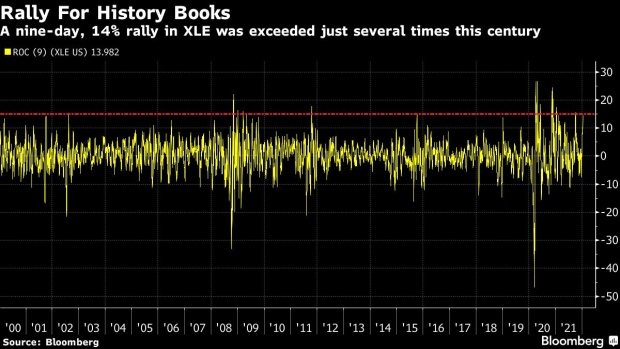 (Bloomberg) -- As this year’s ascent in energy stocks becomes close to historic, one options trader is making a big bet that the rally isn’t going to last.

Somebody put on a position around midday Thursday wagering that the Energy Select Sector SPDR Fund will lose a quarter of its value between its current level and March 18. The trader appears to have bought 25,000 contracts in a strategy known as a put spread, wagering that the ETF, known by its ticker XLE, will fall below $47 before the quarter ends.

The trade represents about 43% of the total daily volume of XLE puts, based on the 20-day average, data compiled by Bloomberg show.

The energy ETF has rallied 14% in the first nine days of 2022 in a rate of change that has been exceeded only a few times this century. Driving the strength is a surge in oil prices as the reopening of economies spurs global consumption despite the spread of the omicron variant of Covid-19.

“Energy had a stellar 2021 and while there is expectation of continued demand for commodities in 2022, longer-term investors should anticipate profit-taking along the way, particularly with a such a sharp move higher in just a few trading days of the new year,” said Gareth Ryan, managing director at IUR Capital Ltd., a derivatives-focused investment firm. “After the 14% gain in just the first few days of the year, the energy sector ETF could certainly see a pull-back.”

The trader paid 78 cents for each put spread, spending a total of $2 million for the trade, data compiled by Bloomberg show. A late-session reversal of the ETF’s rally that sent it down 0.5% on the day has pushed the price to $1.03.