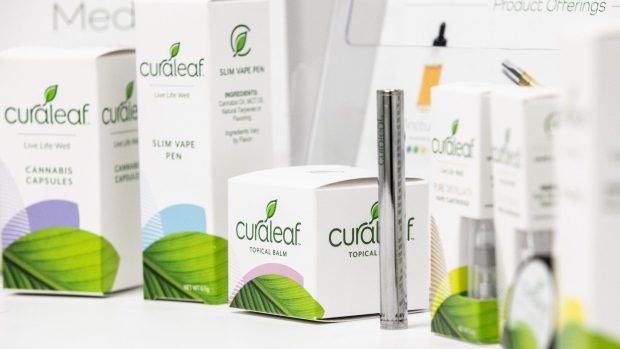 Curaleaf Inc. products are displayed for sale at the company's store in the Queens borough of New York, U.S., on Thursday, Oct. 18, 2018. Curaleaf, a Massachusetts-based company backed by Moscow banking veteran Boris Jordan with roughly 30 pot stores open in 12 states, is raising $350 million through a private placement that values the company at about $4 billion. Photographer: Jeenah Moon/Bloomberg , Bloomberg

(Bloomberg) -- Some of the biggest cannabis companies in the U.S., from Terrascend Corp. to Curaleaf Holdings Inc., are preparing for rapid growth as legal pot sales expand across the populous Northeast.

The region’s states, home to about 56 million people, may be poised to adopt recreational cannabis use in quick succession, since they are loathe to see residents purchase marijuana next door -- and miss out on the potential tax revenue. While cross-state traffic has been muted during the pandemic, that’s not expected to last. Massachusetts, Vermont, Maine and New Jersey have already made the jump, while New York, Pennsylvania, Connecticut and Rhode Island may be next, if the cannabis industry sees its predictions fulfilled.

Sales in New Jersey, which is the latest domino to fall, should start in the second half of the year, Eric Assaraf, an analyst with Cowen, predicted in a Feb. 22 report. New York, though it hasn’t officially legalized recreational sales yet, is expected to start around the same time.

The largest U.S. cannabis companies are expected see a tangible effect soon. New Jersey may account for about 30% of Terrascend’s sales by 2022, according to Cantor analyst Pablo Zuanic. For context, the company is expected to report 2020 revenue of almost $200 million, so New Jersey’s impact will be significant. Terrascend, which has a cultivation permit in the state, already sells recreational and medical products in California, Utah and Pennsylvania.

New Jersey may also end up generating 20% of Acreage Holdings Inc.’s sales and 12% for Ayr Wellness Inc., according to Zuanic’s Feb. 23 research note. Curaleaf, Green Thumb Industries Inc. and Columbia Care Inc. may get as much as 10% of revenue there. Add New York and other nearby states to the equation, and it’s easy to see why companies are mobilizing quickly.

Some of the biggest cannabis companies by market capitalization -- Curaleaf, Green Thumb, Columbia Care and Acreage -- also have licenses in New York’s current medical cannabis program. That gives them a foothold that will be a boon if New York legalizes recreational use, as expected.

However, New York may take steps to keep the industry diversified and prevent any one competitor from holding too much influence.

The state is considering a two-tier system that will ensure cannabis suppliers and retailers are separate entities, Axel Bernabe, assistant counsel for health to Governor Andrew Cuomo, told me in a recent interview. The measure would help keep any one company from having a monopoly while creating more jobs and ensuring compliance, which would be harder to track if operators do both the growing and selling themselves.

86%: The expected increase in water usage by the U.S. cannabis industry as it grows to reach a $41.5 billion market by 2025, according to a recent report from New Frontier Data.

“I think the legal cannabis industry will absorb the illegal activity over time; it will take away the money that cartels are using to kill and sell illegal drugs. Who wants to be on the violent side? Who wants to be risking your life when you can do this business legally and profitably?” said former Mexican President and Khiron Life Sciences Corp. board member Vicente Fox, speaking about the benefits of Mexico’s legalization of marijuana in a phone interview.