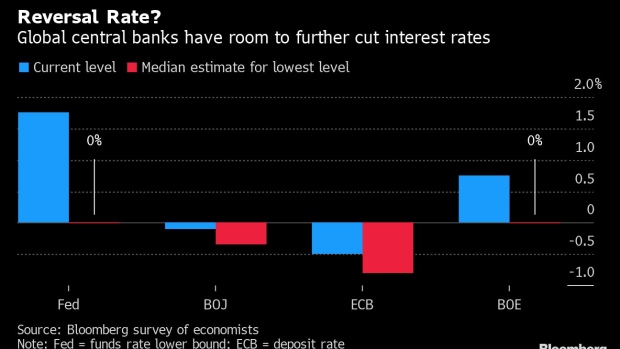 (Bloomberg) -- The global economic slowdown is gathering momentum, raising questions over whether the consumer can keep it going and if central banks have the ammunition to fight back.

To get a better sense of what’s going on, here’s a collection of this week’s analysis and enterprise from Bloomberg Economics:

Global central banks have more space to cut interest rates, though the Federal Reserve probably won’t dip into negative territory. Those are the highlights from a survey of economists on how policy makers will adjust their benchmark rates as recession risks loom large, Enda Curran and Catarina Saraiva show. Craig Torres and Catarina report on how the Fed is starting to ponder how to deal with low inflation, while Rich Miller explains why this recession may be different. Chris Anstey and Toru Fujioka review the experience of Japan.

Everyone’s got a reality check given that expectations for the U.S.-China relationship to get back on track this week are looking upside-down on multiple fronts, as Shawn Donnan outlines from Washington. Jenny Leonard produced a series of scoops which may impact the talks too.

Rocked by its most violent protests in decades and all the pressures of an export-reliant economy in a time of escalating trade tensions, Hong Kong is set for a recession without a quick rebound, Eric Lam explains from the territory.

Consumer powerhouses India and China have all but stopped shopping. Ari Altstedter tracks the consumer woes from Mumbai, where the financial system’s overextended loans and unemployment at a 45-year high weigh on households. In Beijing, Carolynn Look and Qian Ye find more cautious habits and a generational preference for fewer luxury purchases.

Brazil’s record-low interest rate is putting the economy in uncharted territory, promising to reshape the economy from the real estate market to the investment landscape, write Mario Sergio Lima and Fernando Travaglini.

The Baby Bust and the Global Economy (Podcast)

On this week’s Stephanomics, reporter Jeannette Neumann visits a region in Spain with the lowest fertility rate in Europe. Host Stephanie Flanders also talks with Darrell Bricker, co-author of the book “Empty Planet.”

To contact the editors responsible for this story: Simon Kennedy at skennedy4@bloomberg.net, Zoe Schneeweiss