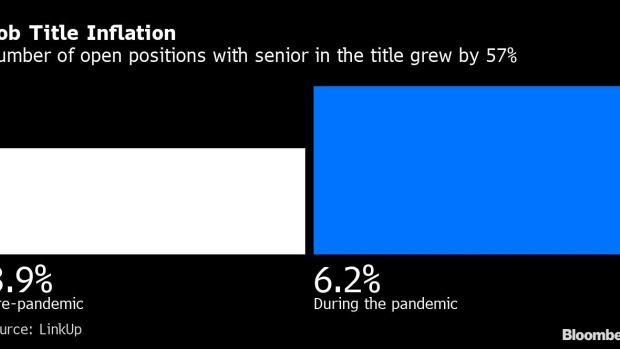 Commuters ride a subway in New York, US, on Thursday, June 30, 2022. The head of New York's Metropolitan Transportation Authority warned the agency's anticipated $2 billion budget gap may widen in 2026 as it struggles to win back riders. , Bloomberg

Once prevalent mostly with startups, job-title inflation has gone increasingly mainstream, said Shawn Cole, president of Cowen Partners, a nationwide executive search firm. It “exploded” during the pandemic as companies competed for talent in the Covid-19 economy and more of them leveraged titles to entice experienced workers.

As a result, “director” is becoming the new “senior,” he said.

A review of US job postings from LinkUp, a global job-market data and analytics firm, found that before the pandemic, listings with “senior” in the title hovered around 3.9% of US jobs. That number grew rapidly during the pandemic, peaking at 6.2% this spring, an almost 60% surge.

Companies “do all sorts of things to put together attractive overall compensation packages” in an unusually tight labor market, said Andy Challenger, senior vice president at executive outplacement firm Challenger, Gray & Christmas. “And one of those things is your title.”

Employers and job candidates will generally know the game and use titles as leverage. The risk is that there may be less to it than meets the eye.

If “you don’t have the responsibilities that you would normally associate with the title, it can be a problem for employees,” said Challenger. Some job seekers may face an ego hit when they try to change jobs after being given a grand-sounding title.

Deploying job titles can cut both ways, including the naming of Wall Street vice presidents that led to a dispute at Goldman Sachs:

A Bloomberg Law study in 2020 found that hundreds of lawyers at Kirkland and Ellis, one of the richest law firms, were promoted to non-share partners -- a step higher than associate status but short of the equity partner position that allows profit-sharing.

Part of the reason is generational. While baby boomers would wait 10 years for a promotion, now people are being promoted every one to two years, Cole said. And there are other risks.

“Once you accept an inflated title at your company, it’s hard to go back,” Cole said. “Recruiters will scrutinize your experience and future employers will question your legitimacy.”