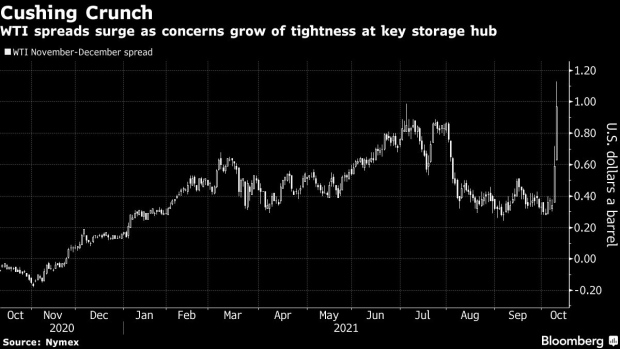 (Bloomberg) -- Big swings in the price of oil derivatives signaled that U.S. crude supply is getting tighter, adding another dimension to the volatility that’s gripping energy markets.

The gap between the price of West Texas Intermediate futures for immediate delivery and contracts for a month later -- known as the prompt timespread --- surged to the widest in more than two years. That’s an indication that stockpiles at the storage and distribution hub of Cushing, Oklahoma, are set to shrink.

“Cushing is the only place where there’s surplus crude and that’s going to start being pulled quickly,” said said Gary Ross, a veteran oil consultant turned hedge fund manager at Black Gold Investors LLC. “That sets the stage for an explosive move on WTI structure. It has doubled in the last two days and it could double again quite quickly.”

The prompt timespread, which normally moves a handful of cents in a day, spiked by as much as 54 cents early on Monday. The move, which took the total timespread as high as $1.13 a barrel for the first time since September 2019, could go even further as inventories are expected to shrink amid a global energy crunch.

Oil prices have surged to multiyear highs as investors piled into bullish positions. Money managers and other speculative traders posted their third-biggest increase in so-called spread positions ever last week.

“The market is worried about Cushing balances as October is looking like a draw,” said Scott Shelton, energy specialist at ICAP. “We could see stocks under 30 million barrels by the end of the year.”

U.S. crude stockpiles fell to the lowest since October 2018 during the week ended Sept. 17, although they have rebounded a little since, according to data from the Energy Information Administration.

Inventories at Cushing, the delivery point for benchmark U.S. crude futures, were at 36 million barrels on Oct. 1, far below the seasonal average for the last five years. Crude stocks at the hub fell by 2.2 million barrels in the week to Oct. 8, said two people, citing the latest data from Wood Mackenzie Ltd.

“We should be building stock in October, and we’re not building anything like what we would normally, so that is a mega bullish factor,” said Ross. “It’s going to get very, very tight.”