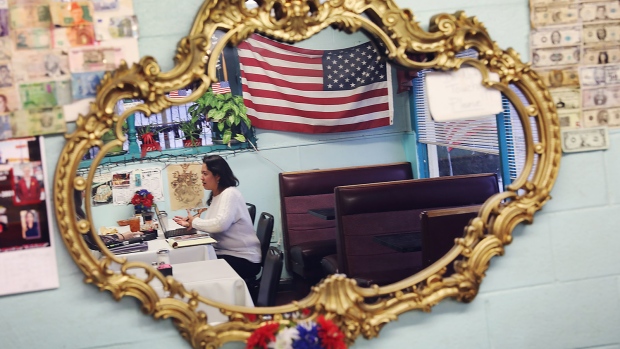 FORT HANCOCK, TX - JANUARY 14: Theresa Chavez is seen reflected in a mirror as she stops by Angie's Cafe on January 14, 2019 in Fort Hancock, Texas. The U.S. government is partially shutdown as President Donald Trump is asking for $5.7 billion to build additional walls along the U.S.-Mexico border and the Democrats oppose the idea. Ms. Chavez said "the money would be better spent on manpower and technology because people will always find a way to come over, around or through a wall." (Photo by Joe Raedle/Getty Images) , Photographer: Joe Raedle/Getty Images North America

(Bloomberg) -- The longest government shutdown in U.S. history could cause tens of thousands of businesses to make a tough choice about whether to claim one of the biggest perks in the Republican tax overhaul.

Owners of so-called pass-through entities such as partnerships and limited liability companies have to file their businesses’ returns by March 15 -- and still don’t have the final word from the Internal Revenue Service about who, exactly, qualifies for the 20 percent deduction on business income. Those returns form the basis of their personal returns, which are due on April 15.

The rules were nearing publication when the shutdown began, but could now face delays as the majority of IRS workers, who are responsible for writing the final regulations, and White House Office of Management and Budget employees, who would then review the regulations, are furloughed.

If companies take a position that the IRS challenges, they could be hit with penalties tied to the amount of the underpayment plus interest -- which is 6 percent for the first quarter of 2019.

The break, which could reduce a firm owner’s tax bill by as much as one-fifth, was included in the Republican law as a way to cut rates for companies that didn’t benefit from the overhaul’s slashing of the corporate tax rate. The deduction applies to the hundreds of thousands of pass-through businesses -- from mom-and-pop convenience stores to private equity funds -- and has been regarded as one of the most complicated changes in the tax law.

“It’s mid-January and you have to start making some decisions,” said Don Williamson, executive director of American University’s Kogod Tax Center. “Small taxpayers are in a crunch.”

Matt Leas, a spokesman for the IRS, referred comments to the Treasury Department. A Treasury spokeswoman didn’t respond to a request for comment.

The agency issued proposed regulations in August that gave businesses some clarity about what kinds of businesses and income are eligible for the deduction. But there are still dozens of questions about how the tax break applies.

For example, are long-term care facilities in the business of health services? If so, they can’t get the tax break. But if they’re not, they can qualify for as much as a 20 percent deduction. Banks face a similar issue. Income from taking deposits and making loans qualify, but other services that banks offer -- such as financial advice or wealth management -- may not.

Owners of rental real estate also don’t have a clear answer about whether they can get the write-off. Tax advisers agree that the more owners are involved in the day-to-day operations, the more likely they can get the tax break. Yet tax professionals don’t know how much activity is enough, meaning their clients could face an IRS challenge if they aren’t careful when filing their returns.

Pass-through owners make estimated quarterly tax payments throughout the year. Last year, the first two payments were due before the IRS issued any guidance about the deduction, leaving it up to taxpayers to make their best guess about how much they owe. When taxpayers file their returns this year, they’ll effectively settle up with the IRS, by either paying any additional amount they owe or receiving a refund.

Accountants hope any issues will be addressed in final regulations, but when those could be available is unclear. The partial shutdown is the longest in modern U.S history and entered its 24th day on Monday, when President Donald Trump rejected the latest proposal by Republicans to cut an immigration deal and resolve the impasse.

Many businesses may end up filing for an extension to file their tax returns, so they don’t have to rely on guidance that may be outdated in a few weeks or months, according to Julia Dengel, a manager at accounting firm BKD. That would give taxpayers an additional six months to file their returns from the filing deadline, meaning pass-through entities would have until Sept. 16 and pass-through owners would have until Oct. 15.

Taxpayers that don’t take the prudent approach could end up paying their accountants to prepare their returns twice, said Ed Reitmeyer, a regional partner-in-charge at accounting firm Marcum LLP. Before the proposed regulations were released, some companies paid their lawyers to restructure their business in an attempt to get a bigger deduction, he said.

“Then the regulations came out and quashed all of that,” Reitmeyer said.

All taxpayers who earn less than $157,500, or $315,000 for a married couple, can deduct 20 percent of the income they receive via pass-through businesses from their taxable income. If taxpayers earn above those amounts and aren’t service professionals -- such as lawyers or accountants -- they must also meet tests to take the full deduction. The size of their deduction depends on how much they pay in employee wages or how much they’ve invested in capital like real estate.

In some cases, not having the final rules can be a benefit, said David Dvorak, a certified public accountant. The complexity of the rules and the lack of guidance in many areas give taxpayers wiggle room to claim the biggest deduction possible, he said.

“It’s just so complicated and there are so many rules to consider,” he said. “Particularly for higher wealth individuals, there are a lot of things you can do to maximize the deduction.”

To contact the editors responsible for this story: Alexis Leondis at aleondis@bloomberg.net, John Harney