PARIS, FRANCE - MAY 31: In this photo illustration, logos of the Google, Apple, Facebook, and Amazon applications (GAFA) are displayed on the screen of an Apple iPhone on May 31, 2018 in Paris, France. The acronym GAFA refers to the four most powerful companies in the world of the internet: Google, Apple, Facebook and Amazon. The European Union has decided to better tax the giants of the internet with Brussels proposing to tax 3% of income generated by the data of users of Internet companies. This new tax would bring in 5 billion euros a year in the European Union. (Photo by Chesnot/Getty Images) Photographer: Chesnot/Getty Images Europe , Photographer: Chesnot/Getty Images Europe

Big tech powered U.S. stocks to a third straight winning year in 2021, as giants like Apple Inc. and Microsoft Corp. continue to see strong demand almost regardless of the economic environment.

Five of the market’s most notable Internet and technology names -- Apple, Microsoft, Google parent Alphabet Inc., Amazon.com Inc. and Facebook parent Meta Platforms Inc. -- rose this year, even as they finished in the red on the final trading day of 2021.

While their 2021 performances varied from Alphabet’s 65 per cent surge to Amazon’s 2.4 per cent slog, the group collectively added more than US$2.45 trillion in market valuation. Microsoft, Apple and Alphabet were among the three biggest contributors to the S&P 500 Index’s 2021 gains.

“Investors have recognized that these companies continue to do extremely well,” said Mark Luschini, chief investment strategist at Janney Montgomery Scott, which has about US$125 billion in assets under management. The rapid growth of their profits, their competitive moats and the strong balance sheets have protected them from some of this year’s risks, he added. 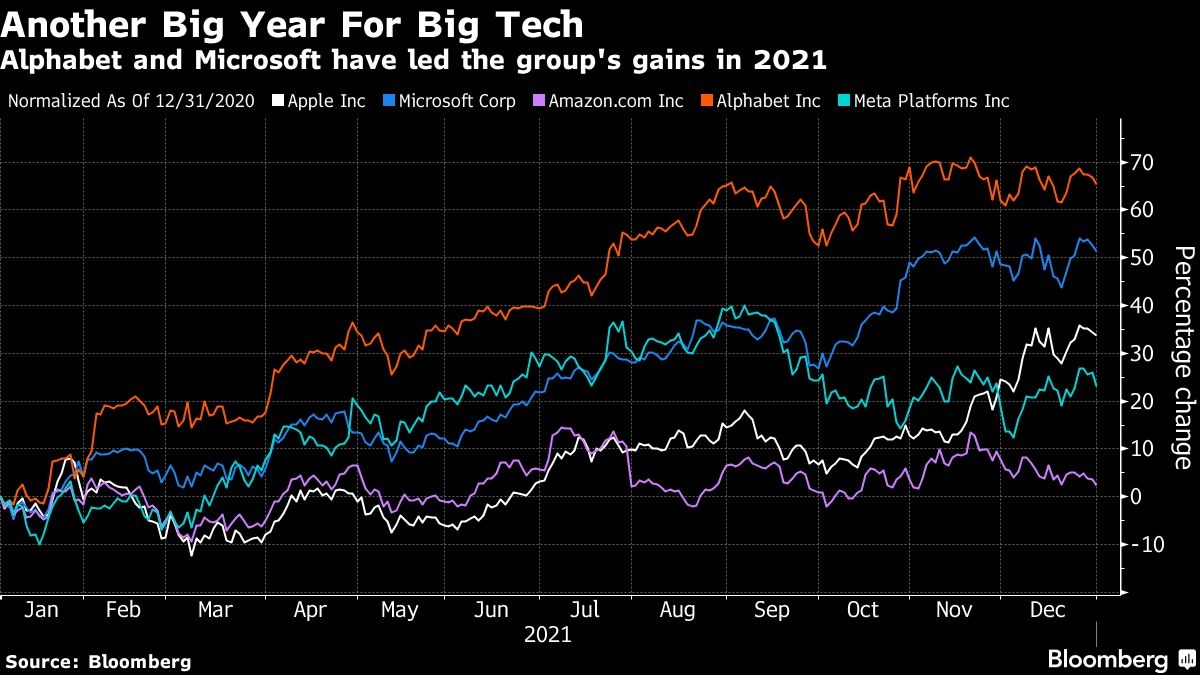 “While I believe in the merits of tilting toward cyclical names going into 2022, I would not abandon tech,” Luschini said.

Here’s how the group performed in 2021, starting with its biggest gainer:

Google’s parent company soared 65 per cent in 2021, making it the top performer among Wall Street’s biggest names. This was the strongest year for the stock since 2009, and it briefly joined Apple and Microsoft with a US$2 trillion market valuation.

Alphabet benefitted from growth in its cloud business as well as a rebound in digital ad spending, particularly in key categories like travel that were hurt by the pandemic in 2020. Earlier this week, CFRA upgraded the stock to a strong buy based on its “attractive valuation versus large-cap tech peers” as well as a “belief that it can sustain a mid-teen annual revenue growth pace over the next three years.”

The software giant surged 51 per cent in 2021, pushing it into the US$2 trillion market capitalization club. The stock has gained for 10 consecutive years, its longest such rally ever, and it’s put up double-digit returns for nine straight years. The shares have risen nearly 1,200 per cent since the end of 2011. 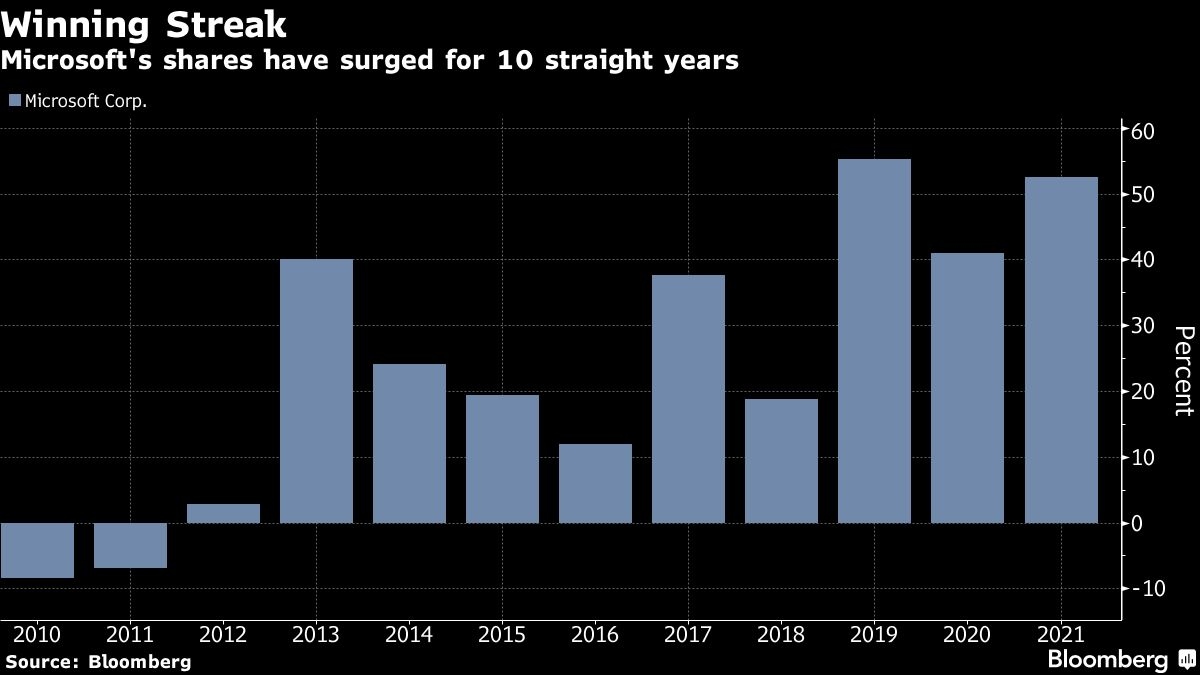 Microsoft’s strength came from steady demand for its cloud computing and enterprise software.

The iPhone maker rose 34 per cent in 2021, beating the S&P 500 for a third straight year. While 2021 marked its weakest performances of the three -- the stock rose more than 80 per cent in both 2019 and 2020 -- the rally brought the company within striking distance of a historic US$3 trillion market capitalization.

Despite issues like a shortage of chips and the ongoing pandemic, which recently prompted Apple to shut its New York City retail stores, the stock remained a favorite with investors in 2021. 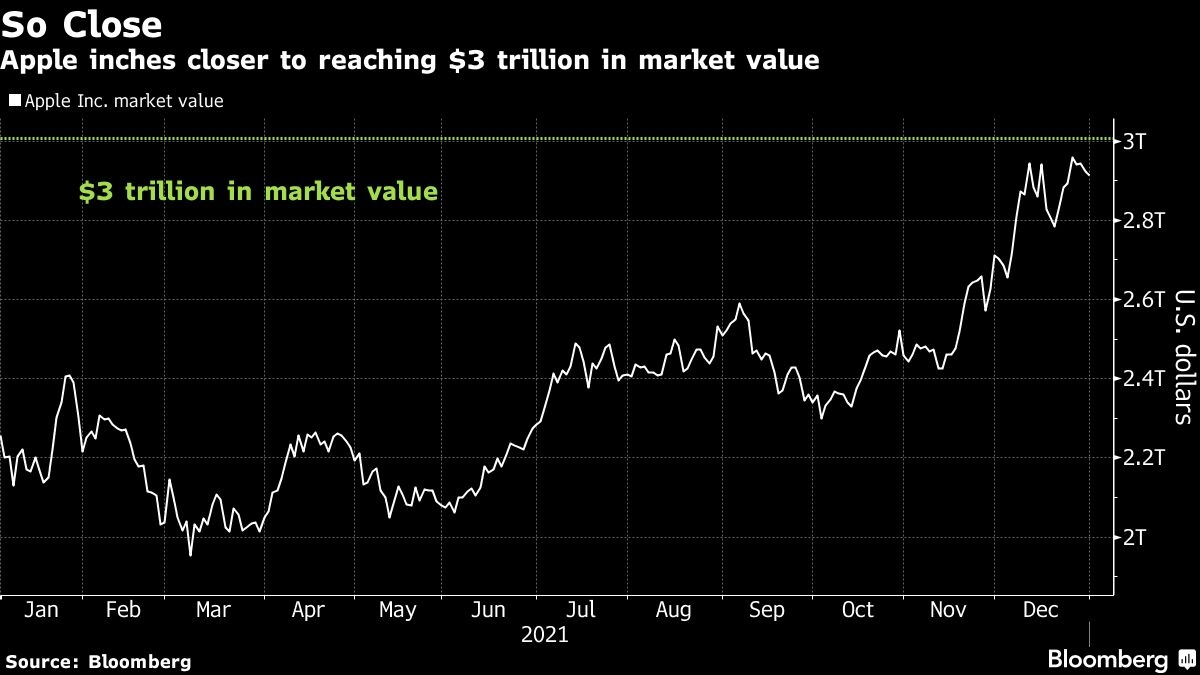 The company continues to benefit from the global popularity of its products, the potential for new offerings to maintain steady sales growth and a strong cash balance. And the future looks bright with investors favoring equities that considered high quality with long records of growth amid the uncertainty related to Federal Reserve policy and the prospect of higher rates.

Shares rose 23 per cent in 2021, roughly in line with the S&P 500, despite one of the most tumultuous years in the company’s history. While Facebook’s parent continued to benefit from high user engagement across its platforms and an ongoing shift of advertising budgets toward social media, it struggled with the impact of Apple’s changed privacy policy and intense scrutiny of its products, especially after the release of documents from a whistleblower.

In October, the company announced a new focus on the metaverse, an immersive virtual reality technology, and a new name to reflect the shift.

Meta’s gains came mainly in the first half of 2021, as the stock hasn’t traded at a record since September. However, Wall Street is optimistic about the company’s prospects in 2022, given what’s seen as an attractive valuation and a powerful engine for generating profits. Baird just named it one of its top large-cap internet picks for next year.

The e-commerce company was a notable underperformer in 2021 relative to its megacap peers and the market as a whole. The stock gained 2.4 per cent, enough for a seventh straight positive year, its longest winning streak ever. Since the end of 2014, the shares have soared nearly 1,000 per cent.

Amazon traded within a fairly narrow range throughout the second half of the year, as a pair of disappointing quarterly reports, rising labor costs and supply chain disruptions weighed on shares. On Wednesday, Mizuho Securities managing director Jordan Klein wrote that among investors there’s a “clear view that the sell-side seems to be mis-modeling 1H22 (as in much too high.)” Still, a number of firms have named Amazon their top pick for 2022.