I wouldn't agree we the idea that we will see an extreme sell-off: Global X's Jay Jacobs

The trouble in megacap tech is showing no signs of stopping, and earnings from some of the most-prominent names are adding to investors’ list of worries.

Marquee companies like Apple Inc. and Microsoft Corp., which are due to report their results next week, have come under additional pressure, with the Nasdaq 100 now on pace for its worst month since the 2008 financial crisis. A grim outlook from streaming giant Netflix Inc. was the latest excuse to sell the industry’s shares. Amazon.com Inc. and Facebook parent Meta Platforms Inc. were down over 20 per cent from their records.

More than US$1.7 trillion in value has been erased from the Nasdaq 100 in January, with the tech-heavy gauge entering a correction this week after falling more than 10 per cent from a recent peak. The industry that has powered the bull-market rally from the depths of the pandemic has recently suffered on concern that skyrocketing valuations, the potential for slowing earnings and Federal Reserve tightening will make it harder to justify more gains going forward.

“We don’t know where valuations will stabilize, but we do know that the economic environment and the monetary policy backdrop aren’t as positive as what we had in 2020 and 2021,” said Michael O’Rourke, chief market strategist at JonesTrading. The earnings season will provide clarity into business conditions, he added, but in the meantime, megacap names continue to trade at elevated valuations.

“That’s a reason to be cautious,” he noted. 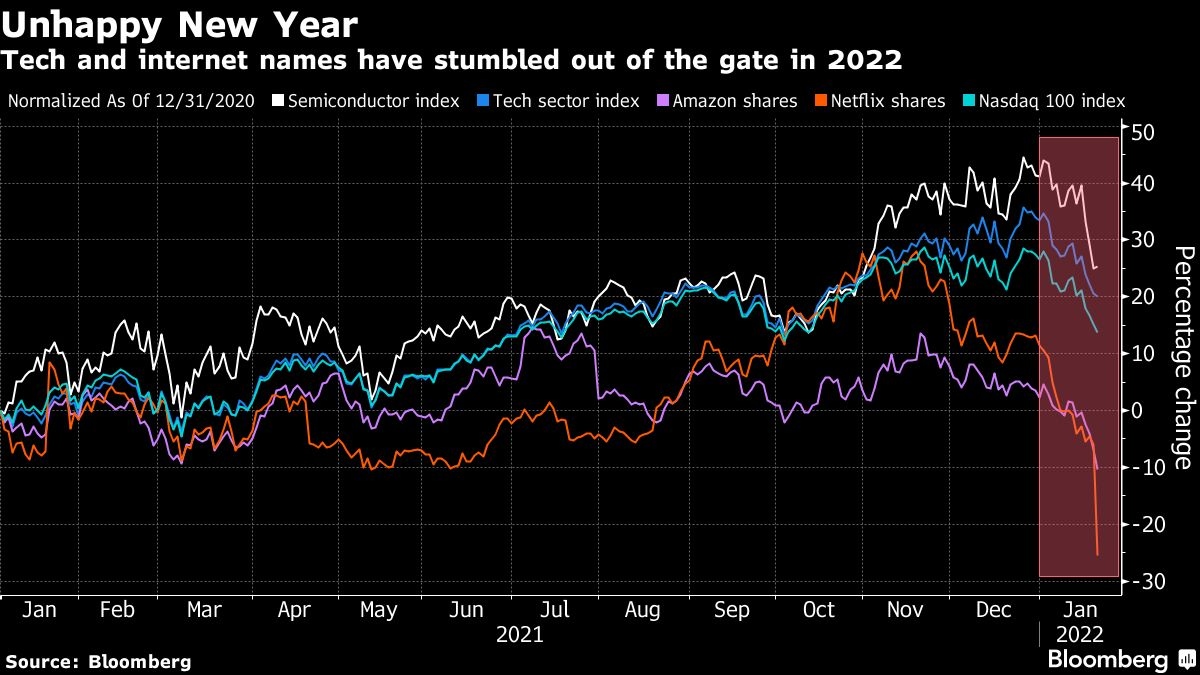 Netflix cratered more than 20 per cent Friday after saying it expects to add just 2.5 million users in the current quarter -- well short of Wall Street’s estimates. The selloff sent the stock to its worst session in almost a decade. Tech shares in the S&P 500 and a gauge of chipmakers had their biggest weekly losses since the onset of the pandemic.

While tech is among the worst performers this year in the S&P 500, companies that stand to benefit the most from an economic rebound have outperformed. In a rotation out of growth and into cyclical names, energy producers are the only ones in the green so far in January among the U.S. benchmark’s 11 major groups.

It’s a shift to value that Bank of America calls “one of the biggest reversals in history,” with analyst Ohsung Kwon expecting the move to continue.

Netflix’s outlook underlined concerns about its growth prospects, an issue that amplifies worries over high valuations in a rising-rate environment. The yield on the 10-Year Treasury approached 2 per cent earlier this year, compared with less than 1.4 per cent in early December. That’s seen as a headwind for many investors as higher rates discount the present value of future earnings.

For Jordan Klein, an analyst at Mizuho Securities, the upcoming results from big names in the industry will be critical against the backdrop of overall tech weakness.

“What they offer as guidance and how stocks react is likely to tell us whether this tech selloff gets worse or better in the coming weeks,” he wrote.