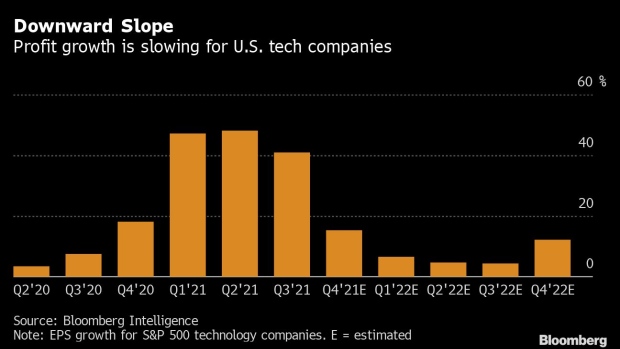 Technology stocks have stumbled into the new year, with the Nasdaq 100 Index down 4.3% on fears that the Federal Reserve’s efforts to combat inflation will curb valuations for the sector. Futures on the benchmark are slumping again Tuesday, down 1.8% at 6:25 a.m. in New York, as bond yields spike anew.

So if ever there was a time for megacaps like Apple Inc. and Microsoft Corp. to show off surprisingly strong profit growth, it’s now. Unfortunately for bulls, that’s not what’s in the forecast for fourth-quarter results.

“Earnings is of the most importance right now to maintain the balance with rates moving higher,” said Michael Casper, an equity strategist with Bloomberg Intelligence. “It is critical that these companies hit or beat estimates just to tread water.”

The tech sector, which contains many companies valued mainly on the promise of future profits, has been under pressure because of the surge in the U.S. Treasury yields that are used to value long-dated earnings in today’s dollars. The higher yields rise, the thinking goes, the less those future earnings are worth now, placing more importance on bigger profits to make up the difference.

So far, most of the carnage has played out in corners of the market with the highest valuations such as software companies and innovation stocks championed by Cathie Wood’s ARK Investment Management. Zoom Video Communications Inc. and DocuSign Inc., for example, have lost more than half of their market values from peaks. Megacaps like Apple, down about 5% from a record, have held up relatively well.

Many U.S. tech stocks are being treated as “a safe harbor” because of their robust earnings, strong balance sheets and mature businesses, according to Kristina Hooper, chief global market strategist at Invesco.

Tech “is the ultimate secular growth play,” she said in an interview. “There will be more spending on cybersecurity, cloud computing, software, all these major areas of tech.”

The sector has been among the most reliable at beating Wall Street projections. Last quarter, more than 90% of the companies in the S&P 500 information technology group beat profit estimates, the best performance among the index’s main sectors.

The benchmark index for semiconductor stocks has had a good run in the past six months, outpacing the Nasdaq 100 Index. Now comes a test as Intel Corp. and Advanced Micro Devices Inc. prepare to report earnings. Stocks have been riding higher on unprecedented demand for chips used in everything from refrigerators to cars, leading to a severe crunch in 2021.