Amazon.com Inc. sold more groceries than ever before, but warned of steep losses ahead. Traffic surged on Facebook Inc. and Google sites, though advertising dried up. Apple Inc. made US$11 billion in three months, yet, for the first time in over a decade, didn’t give a forecast.

First-quarter results this week for America’s major technology firms came in better than feared. With the global economy in free-fall, the tech giants proved they remain essential services for millions of people and they have strong enough financial footing to weather the initial wave of the pandemic. But anyone looking to these companies for signs of immediate relief did not find it. Beyond the results was a clear indication that the second quarter will be bruising.

Apple’s unusual silence was a case in point. “If the company with the best customers and supply can’t figure out what will happen in the next two months, maybe nobody can,” said Andrew Uerkwitz, an analyst at Oppenheimer & Co.

Similarly, Amazon gave investors an extremely hazy picture of its future. Growth in the number of items sold on the e-commerce site jumped the most since 2012. The online retailer bulked up its grocery delivery by 60 per cent — a sign of surging demand as online ordering becomes a necessity for millions. FBN Securities Inc. called Amazon the “ultimate ‘stay-at-home’ stock.”

Yet costs are piling up to deliver goods to the quarantined masses and test employees for the virus. The company cautioned it could lose US$1.5 billion in the current quarter. “If you’re a shareowner in Amazon, you may want to take a seat,” Chief Executive Officer Jeff Bezos said. The “stay-at-home stock” fell 7.6 per cent on Friday.

Before this week, big tech shares led a sharp stock-market rebound. Amazon had surged 44 per cent from mid-March. Facebook was up 23 per cent, while Google and Apple had risen 15 per cent and 14 per cent, respectively. But as the results rolled in, investors accustomed to clear guidance were left staring into a void. 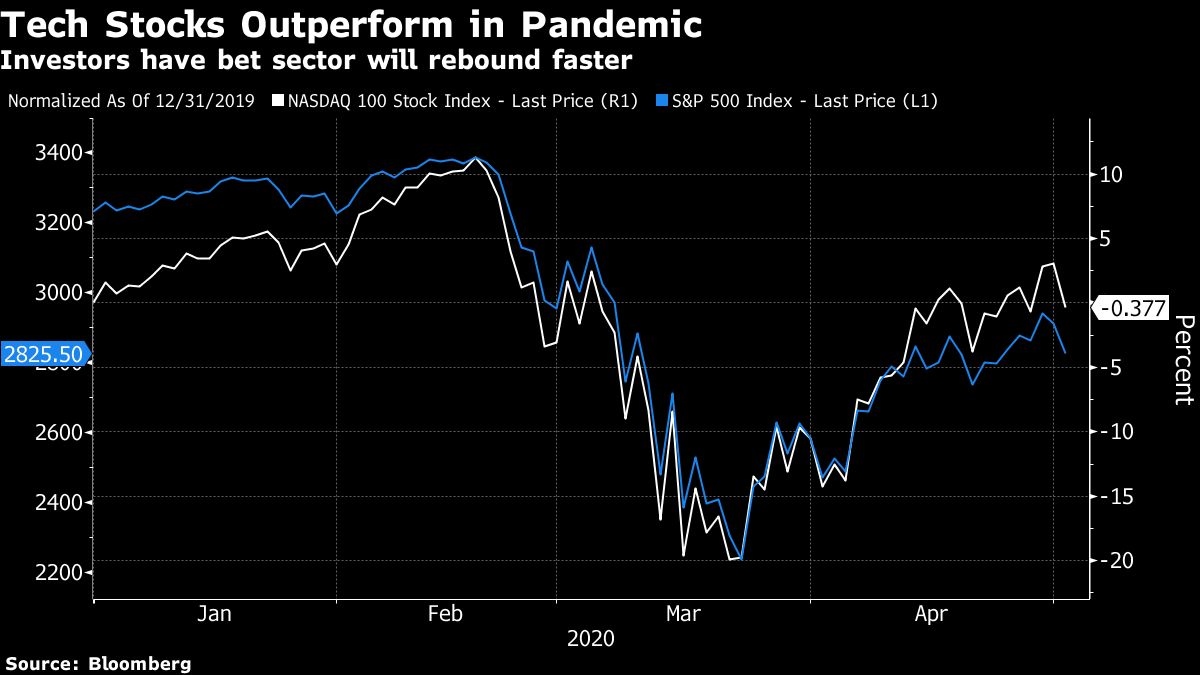 “It’s worrisome,” Mike Walkley, an analyst at Cannacord Genuity, said after Apple’s results late Thursday. “Tech has been the saving grace with the hope that it’s the leader on the backside of the recovery.”

Google parent Alphabet Inc., a company that never gives specific forecasts, mostly offered vague caution about what lies ahead. Usage soared as the pandemic spread. Searches for information about the coronavirus were four times as high as search activity during the Super Bowl, a peak traffic event. But the company does not show ads on virus search results. While there were some signs of more commercial searches returning in April, these weren’t “durable” trends yet, Ruth Porat, Google’s chief financial officer, said.

Views on YouTube, Google’s video arm, also shot up. More expensive “brand” ads on the site, however, slowed in March and that continued in April, the company said. The second quarter will be “difficult,” Porat warned.

Facebook, like Google, posted sales above expectations with both companies scooping up ad revenue before a sharp decline in marketing spending during March. Mark Zuckerberg, Facebook’s chief executive officer, told Wall Street an extended “economic fallout” could dampen sales going forward. “I worry that this could be worse than at least some people are predicting,” he said. The company cut its 2020 spending plans by as much as US$3 billion.

Advertising swings with the economy. And Google’s Porat suggested the company’s main business could easily regain its footing once the economy “normalizes.” She didn’t say when. “It would be premature to comment on timing, given all the variables here,” she said.

For the biggest tech companies, the short-term losses could be offset by an influx of online shoppers, web searchers, social-media posters and cloud-tapping remote workers. During the quarter, Facebook reported an astounding increase of 100 million daily users across all its apps.

Likewise, the pandemic has played well to tech’s strengths as the web’s utility providers. Video-conferencing, telemedicine, virtual storefronts — few companies are better positioned to capitalize on these trends than the biggest in Silicon Valley and Seattle. Microsoft Corp. reported a standout quarter thanks to growth in cloud-computing, which is also aiding both Amazon and Google.

The companies are well insulated from an ongoing recession, too, with a total of more than US$400 billion in cash among them.

For Amazon, heavy spending could make the stock even more attractive. On its earnings call, the company said it had invested over US$600 million on COVID-19 related items, including personal protective equipment and testing for warehouse staff. The sum could rise to US$4 billion in the second quarter.

Rather than turn off investors, the stats showed how far ahead Amazon is from rivals. As the pandemic continues, more people will order online and they will expect sterile packages, Morgan Stanley analysts wrote in a research note on Friday. Amazon’s “investments are likely to be a differentiator that will make it more expensive to compete against,” the analysts said, raising their share price target to US$2,600.