We're overweight on the TSX, U.S. markets will continue to face challenges in Q3: BMO's Adatia

The world’s biggest technology stocks are crumbling on Monday as broad markets enter into bear market territory amid fears the Federal Reserve will send the US economy into recession.

Large tech stocks with lofty valuations are particularly vulnerable to higher interest rates as it weighs on the current value of the companies’ future profits. After a rebound late last month, the group resumed declines on Friday after the consumer price index showed US inflation accelerated to a fresh 40-year high in May, raising the odds of more drastic interest rate hikes by the Fed.

The selling deepened on Monday, with analysts noting a “bottom” was nowhere within sight.

“Everyone’s crystal ball is so cloudy right now,” said Ted Mortonson, a technology strategist at Robert W. Baird & Co. “I don’t think we’ll get to a bottom until the Fed absolutely annihilates inflation and can pause, but no one knows when that will be.” 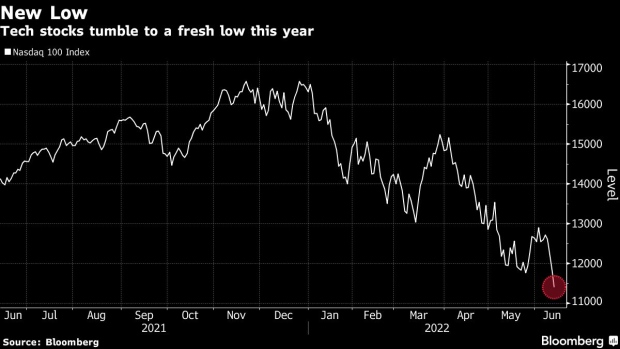 Tech stocks were the biggest drags on the S&P 500 Index Monday, which fell as much as 3.9 per cent to its lowest level since January 2021. The Nasdaq 100 is down about 30 per cent from its peak last year, while the S&P 500 has slumped more than 20 per cent.

Apple, a harbinger of the US stock market, with the biggest weighting in the S&P 500 fell three per cent on Monday. The stock, which usually helps signal shifts in sentiment among investors, is down 25 per cent this year.

Amazon is inching closer to falling below US$1 trillion in market value, Meta is poised to close at its lowest since April 2020 after three days of losses and Microsoft’s four-day losing streak is the longest since March. Chipmaker Nvidia Corp. has lost more than half its value from a peak last year.

“Today’s move is a sign that investors are throwing their hands in the air, looking at the data, and getting nervous about what they see,” said David Lebovitz, global market strategist at JPMorgan Asset Management, who helps oversee US$2.6 trillion in assets.