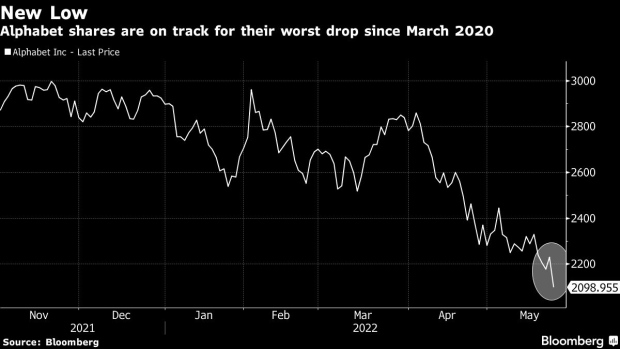 (Bloomberg) -- Megacap technology stocks are sinking again along with hopes that this year’s selloff has reached the point of exhaustion.

Google parent Alphabet Inc. tumbled as much as 8.6% on Tuesday after Snap Inc. cut forecasts issued just a month ago, citing deteriorating macroeconomic conditions and raising concerns about a broad slump in digital advertising.

The turmoil is giving investors flashbacks to some of the worst days of the pandemic, with Alphabet at a 52-week low and on track for its worst drop since March 2020. Meanwhile, Amazon.com Inc. sank 5.9%, leaving the e-commerce giant on the brink of falling below $1 trillion in market value for the first time since April 2020.

“It appears to be clear that most companies will not avoid the troubling macro backdrop,” said Edward Moya, senior market analyst at Oanda.

The tech-heavy Nasdaq 100 Stock Index has fallen nearly 30% from its peak last year as the Federal Reserve pushes an aggressive campaign of rate hikes to fight soaring inflation. The stock slump has brought price-to-estimated profit gauges back near their long-term averages, fueling optimism that perhaps the selling could be nearing a bottom.

Facebook owner Meta Platforms Inc. sank as much as 10% on Tuesday to within striking distance of a new low. The social media giant has fallen more than 50% from a September record amid its own problems of slowing user growth.

Investors are bracing for more volatility with earnings due from chipmaker Nvidia Corp. on Wednesday along with the release of minutes from the Fed’s last FOMC meeting.