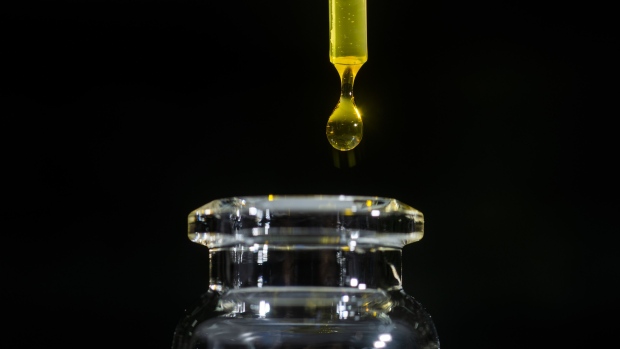 A technician drops a sample of cannabidiol (CBD) from a pipette into a jar inside the LuCan laboratory facility in Maseru, Lesotho, on Thursday, Nov. 14, 2019. The Lesotho government is trying to spur development of legal plantations supplying the burgeoning global medical cannabis industry to broaden its tax base—currently dominated by exports of diamonds, water and wool—and create jobs. Photographer: Waldo Swiegers/Bloomberg , Bloomberg

While tobacco companies are no stranger to marijuana, the expectation has been that they would gravitate toward things like vape or smokeable flower with THC. After all, inhalable products are their expertise.

But Trait’s strongest patents are for a technology that makes CBD water-soluble. That suggests BAT, the London-based maker of Vuse vaping products and Newport cigarettes, could move into other formats for cannabis consumption -- and even end up competing against beer companies.

BAT’s corporate-venture unit led the C$31 million ($25 million) investment in Canada’s Trait Biosciences last month. The deal calls for BAT to help commercialize the technology, which could be used in beverages to make the timing of the marijuana compound’s effects more predictable.

Neither BAT nor Trait would comment on whether the tobacco company has any specific plans to get into non-smokeable CBD products, or the beverage space in particular. But David O’Reilly, BAT’s head of scientific research, hinted at the possibility of new formats.

While the company is expanding its business in heated-tobacco products and vaping, he said, if consumers’ needs are better met with different products, “we’ll develop other platforms, which could be anything.”

Other formats for cannabis -- like CBD cigarettes or chewable products -- would pit the company against smaller firms run by former executives from the tobacco space. Taat International LLC, which makes hemp cigarettes, is overseen by Setti Coscarella, formerly a strategist for Philip Morris International’s reduced risk products. Cannadips, which makes oral pouch products similar to those in the tobacco space, has former Altria Group Inc. executive Peter Diatelevi as chief executive officer.

It’s still unclear what BAT, or Big Tobacco in general, really plans to do with CBD, cannabis’ non-psychoactive ingredient, or other weed-based products. That’s partly because marijuana is still not legal in many countries, and regulation has yet to take shape in others.

Tobacco companies are trying to expand their portfolios beyond nicotine as an increasing number of people quit smoking across the developed world, and cannabis is one promising market. BAT took a stake of around 20% in Canadian pot producer Organigram Holdings Inc. earlier this year. Altria invested in 2018 in Canadian marijuana producer Cronos Group Inc. and bigger rival Philip Morris International Inc. is beginning to take a closer look at the market.

BAT started a city test of CBD vaping products in the U.K. earlier this year that’s still ongoing. The company is focusing on CBD instead of THC -- the psychoactive ingredient -- and cannabis more broadly. There’s a growing demand for CBD products, O’Reilly noted.

While Trait has other specialties, like science to make marijuana plants more resistant to fungus or increase the yield of cannabinoids extracted, the water-soluble technology is drawing interest.

“They were interested for same reason I was, it’s a tremendous opportunity for new product development and building new brands in this territory,” Trait CEO Peter McDonough said in an interview.