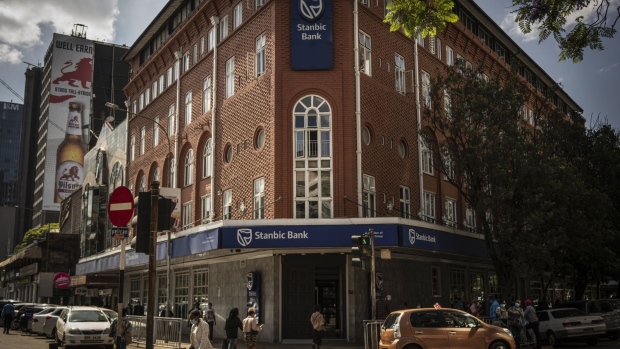 A Stanbic Holdings Plc bank branch in downtown Nairobi, Kenya, on Saturday, Dec. 5, 2020. Kenya is seeking a loan of as much as $2.3 billion from the International Monetary Fund under the lender’s extended fund facility. , Bloomberg

(Bloomberg) -- Stanbic Bank Kenya Ltd., a unit of Africa’s biggest lender by assets, forecasts its mortgage business in the nation to surge as the economy recovers from the pandemic and the end of presidential elections brings political stability.

The unit of South Africa’s Standard Bank Group Ltd. says it’s Kenya’s second-largest mortgage lender and demand for the product is surging. That in part will help the bank’s lending to expand in the “high double digits,” said Chief Financial Officer Dennis Musau.

“The pipeline we have for that area is close to three or four times of what we’ve been able to lend,” Musau said in an interview. “So it’s very, very healthy.”

High borrowing costs have kept most Kenyans away from mortgages. That’s changing as the Kenya Mortgage Refinancing Co., a state-owner financier, is lending to commercial banks at lower rates and helping create another product for lenders in East Africa’s biggest economy. Kenya Mortgage targets to disburse $79.2 million to banks by the end of the year.

Financing from Kenya Mortgage is helping Stanbic offer loans at 9% for affordable housing. It is also offering 13% rates for commercial property.

Eight commercial lenders account for 84% of home loans valued at 245 billion shillings ($2 billion), according to the central bank’s annual supervision report. There are 26,723 mortgage loans in Kenya, most of which are issued with variable interest rates ranging from 7% to as high as 15%, according to the report.

Meanwhile, Stanbic said it will skip an interim dividend, choosing instead to invest in its various businesses.

“The one thing that shareholders would like more than an interim dividend is an even better performance in ensuring that we drive growth of the business for the rest of the year -- that’s the thinking behind the dividend decision,” Musau said.