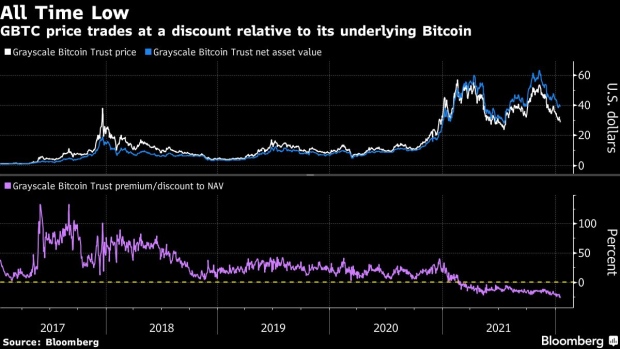 (Bloomberg) -- One of the biggest casualties of the cryptocurrency selloff is the Grayscale Bitcoin Trust.

The $27 billion fund (ticker GBTC) has plunged nearly 17% so far in 2022, outpacing Bitcoin’s nearly 9% decline. As a result, GBTC’s price closed 26.5% below the value of the Bitcoin it holds on Tuesday, widening GBTC’s so-called discount to record levels, according to Bloomberg data.

It’s a dynamic that’s plagued GBTC for months. The trust doesn’t allow for share redemptions in the same manner as an exchange-traded fund, meaning that the supply of shares can’t be created and destroyed with shifting demand. Grayscale Investment LLC applied to the Securities and Exchange Commission in October to convert GBTC into an ETF -- which is expected to quickly repair the discount -- but regulators have yet to approve a physically-backed Bitcoin fund.

“GBTC keeps breaking hearts as the discount widens,” Brent Donnelly, president of Spectra Markets, wrote in a report. “GBTC is basically a binary bet on a physical ETF at this point. Tempting but tempting the way value traps can be tempting.”

GBTC first fell into a discount last February as the number of shares outstanding skyrocketed, after years of trading at a premium to Bitcoin. However, the launch of Bitcoin ETFs in Canada and the first U.S. derivatives-backed Bitcoin ETFs eroded GBTC’s competitive advantage. Grayscale’s parent company, Digital Currency Group, has sought to repair the discount by buying back GBTC shares.

GBTC’s price has dislocated from Bitcoin to an even greater degree than the ProShares Bitcoin Strategy ETF (BITO), which is vulnerable to tracking errors given that it holds futures contracts. While Bitcoin rallied 1.6% on Tuesday, BITO and GBTC fell 3.3% and 6.4%, respectively.