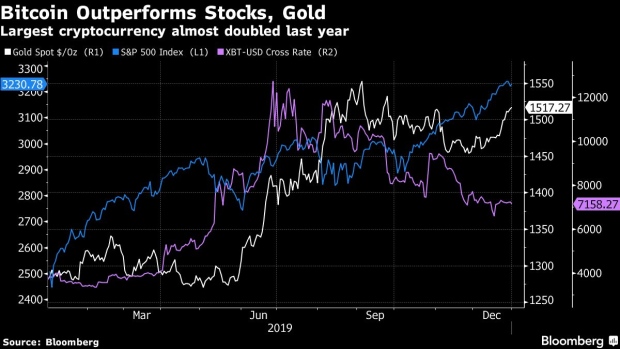 Grayscale Investments, which lets accredited investors own Bitcoin and other coins via its funds, said it took in $608 million last year, surpassing the total amount raised the previous six years. The majority of the inflows -- about 71% -- came from institutions like hedge funds, up from 66% in 2018, according to Grayscale.

Grayscale’s assets under management have increased to about $2 billion just as a slew of rivals -- most notably Mike Novogratz’s Galaxy Digital and Nickel -- launched similar investment vehicles. The companies provide exposure to coins like Bitcoin without forcing investors to hold the cryptocurrencies directly. The Grayscale Bitcoin Trust is the largest such Bitcoin fund.

Grayscale expanded its investor base by approximately 24% in 2019, the company said.