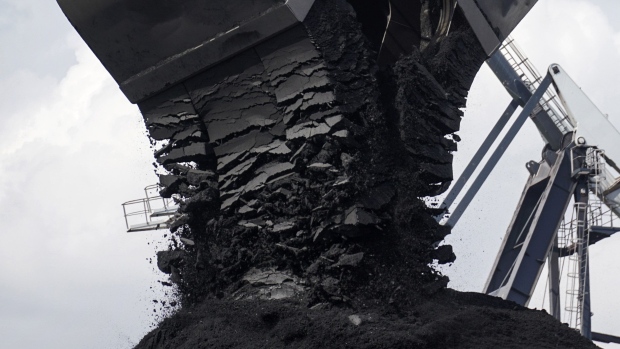 A crane unloads the first shipment of anthracite coal from U.S. supplier XCoal Energy & Resources LLC, for state energy firm Centrenergo PJSC, onto the dockside at Yuzhny Port, near Odessa, Ukraine, on Wednesday, Sept. 13, 2017. A Pennsylvania company will send 700,000 tons of coal to Ukraine in a deal the administration of PresidentDonald Trumpheralded as an important tool to undercut the power Russia has over its European neighbors. Photographer: Vincent Mundy/Bloomberg , Bloomberg

China’s biggest bank has dumped plans to fund a $3 billion coal-fired power plant in Zimbabwe, in a blow to a two-decade effort to develop the project, according to a coalition of 32 environmental groups.

Last year Caleb Dengu, RioEnergy’s chairman, said that ICBC had signed a formal notice of interest in funding the plant, that would be constructed by China Gezhouba Group, while associated transmission lines would be built by Power Construction Corp. of China Ltd. A withdrawal would be a second setback to the bank’s coal funding plans after a permit to build a coal-fired plant in Lamu in Kenya was canceled by the government last year.

“ICBC also confirmed that they will not fund the Lamu coal project in Kenya as well as the Sengwa coal project in Zimbabwe,” Go Clean ICBC said in a June 18 email to 350.org given to Bloomberg by 350.org.

The decision further narrows the funding options available to developers of coal projects in Africa as western and South African banks have come under increasing pressure from their shareholders not to fund developments that could contribute to climate change. While ICBC confirmed receipt of a query from Bloomberg, it didn’t immediately respond.

The Chinese lender is under scrutiny over the environmental impact of funding coal projects and is in discussion with the coalition to “chart a clear road map to stop funding coal,” Go Clean ICBC said in the email. Nathalia Clark, the associate director of Global Communications at 350.org, declined to give further detail.

The coalition had planned to roll-out a global campaign last week against the lender’s coal activity, which it suspended due to the ongoing dialog.

RioEnergy is seeking alternative financiers, a person with direct knowledge of the matter said, asking not to be identified because ICBC’s withdrawal hasn’t been formally announced. Simba Mhuriro, the general manager at RioEnergy said he wasn’t privy to the matter and couldn’t comment. Wilson Gwatiringa, a spokesman for RioZim declined to comment.

Sengwa was initially owned by London-based miner Rio Tinto Group, the one-time parent of RioZim Ltd. It was set aside as Zimbabwe’s relations with the U.K., its former colonizer, deteriorated. After the project was revived in 2016, General Electric Co. and a unit of Blackstone Group LP didn’t pursue initial inquiries.

The backing of ICBC was seen by RioEnergy as a fresh start in a plan to develop the plant and end recurrent power outages in Zimbabwe.