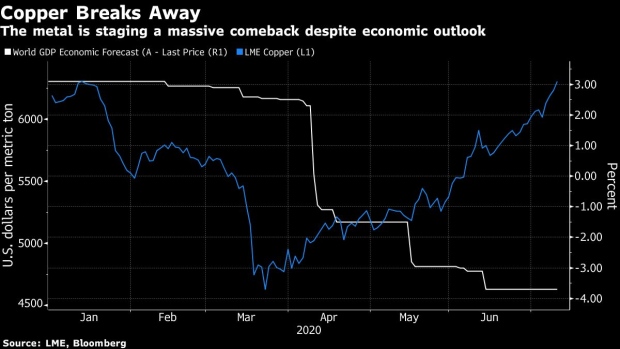 (Bloomberg) -- The world’s two largest copper producers are giving metal markets even more reason to fear supply disruptions that have helped send prices to the highest in a year.

Peru, the second-largest copper miner, is taking longer than expected to ramp up mines after a two-month lockdown as workers fall ill, a top official said Thursday. At the same time, workers at two mines in No. 1 producer Chile are voting on whether to strike over wages.

A slower-than-expected return to full production in Peru and the possibility of labor disruptions in Chile add to supply concerns that have helped fuel a rally in copper prices and are leading some analysts to predict a market deficit this year. Chilean mines that account for a quarter of global output have shelved non-essential activities in a bid to maintain output as Covid-19 cases grow. Copper futures headed for a 5% weekly gain in London.

“The combination of these events in these two key jurisdictions are certainly supportive for copper prices in the short term,” said BTG Pactual analyst Cesar Perez. “Supply risks are growing.”

In Peru, mines were expected to be almost back at pre-pandemic levels by the end of this month but that forecast is now looking too optimistic, Energy & Mines Minister Susana Vilca told reporters on a video call.

Mines are finding a number of infected workers when they arrive to start a new shift, she said. “That means there are fewer workers and we have less production capacity. That means we can’t reach the target.”

Copper output in Peru slumped in March and April after the industry was ordered to cease all but essential operations. Declines slowed in May after the government approved a phased restart, with limits on workforce capacity to prevent infections. Antamina, one of the country’s top mines, produced barely any copper in May following an outbreak among its workers that led to one death.

In Chile, voting by most workers at the Zaldivar mine and supervisors at the Centinela mine will conclude on Friday and Monday, respectively, as part of collective bargaining, said Guillermo Esquivel, who heads Zaldivar Union No. 1. Both mines are owned by Antofagasta Plc.

“None of the demands of workers were met,” said Esquivel, whose union represents 652 of the roughly 900 employees at Zaldivar. “So this vote means that a rejection of the company’s final offer will become a strike.”

Still, Chilean labor laws provide an option for government mediation before a strike begins. That would mean any disruption to operations could be weeks away.

“We strongly reject their offer because the only thing that interests them is producing at low cost without giving any consideration to the workers,” said Celso Pardo, president of Centinela’s supervisors union which represents 396 out of about 2,000 total workers at the mine.

The two open pit mines are in the Antofagasta region of northern Chile. The company’s largest mine, Los Pelambres, is further south in Coquimbo.

(Updates with prices in third paragraph)