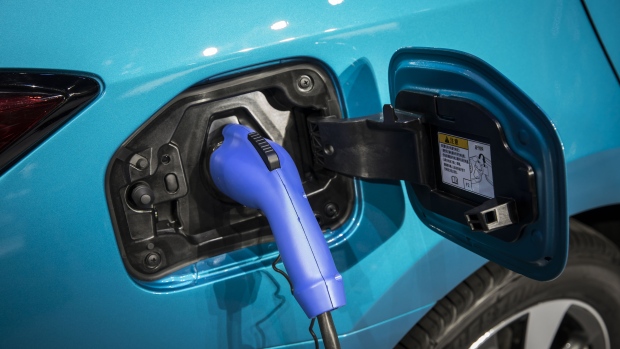 The Toyota Motor Corp. plug-in hybrid Corolla vehicle stands plugged in to a charging station at the Beijing International Automotive Exhibition in Beijing, China, on Wednesday, April 25, 2018. The Exhibition is a barometer of the state of the world’s biggest passenger-vehicle market. Photographer: Qilai Shen/Bloomberg , Bloomberg

(Bloomberg) -- Shares of the world’s biggest maker of electric-vehicle batteries jumped on their trading debut as investors bet on rising demand for new-energy cars worldwide.

Contemporary Amperex Technology Ltd. rose by the maximum 44 percent to 36.20 yuan at 10:17 a.m. in Shenzhen, China, valuing the company at about $12.3 billion. The manufacturer sold a 10 percent stake at 25.14 yuan a share in its initial public offering on May 30.

Investors are confident that CATL, as the company is known, can fend off rivals including Panasonic Corp. and continue to win orders as automakers move toward electric vehicles. CATL, whose customers include Volkswagen AG, had reduced the size of its IPO by more than half compared with its original ambitions because of declining margins and a cap imposed by Chinese authorities on price-earnings ratios in IPOs.

CATL has said it will use the proceeds to help finance a new 24 gigawatt-hour factory at its home base of Ningde, Fujian Province, and to develop next-generation battery technologies. CATL is supplying its cells to a slew of new cars being introduced by global auto majors in China, including Toyota Motor Corp.’s ix4, a rebadged pure EV developed by its Chinese partner Guangzhou Automobile Group, and Hyundai’s plug-in version of the Sonata.

The company is also nearing a decision to build a battery factory in Germany, planting a flag on the home turf of car giants Volkswagen, BMW and Daimler AG as part of a push into Europe, people familiar with the matter said last week.

Zeng, the largest shareholder, is cementing his position on China’s rich list along with the IPO. He said last month that CATL will in the next three years “grasp the opportunities of the fast growth in the global lithium-ion battery market, and maintain our leading position in technologies, manufacturing, capacity and talents.”

While CATL is the biggest manufacturer of batteries when including all electric-vehicle types, Panasonic is the largest maker of batteries for the narrower category of regular-sized electric cars, also known as highway capable passenger electric vehicles, according to Bloomberg New Energy Finance.

To contact the reporter on this story: Ma Jie in Tokyo at jma124@bloomberg.net

To contact the editors responsible for this story: Anand Krishnamoorthy at anandk@bloomberg.net, Ville Heiskanen, Sam Nagarajan