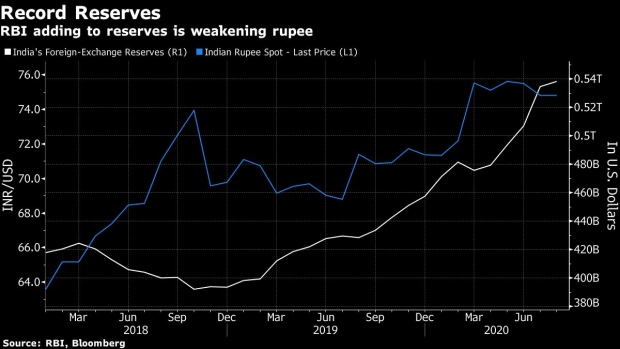 A cyclist wearing a protective mask rides along an empty road past the Reserve Bank of India (RBI) headquarters during a lockdown imposed due to the coronavirus in Mumbai, India, on Wednesday, March 25, 2020. India imposed a three-week long nationwide lockdown for its 1.3 billion people, the most far-reaching measure undertaken by any government to curb the spread of the coronavirus pandemic. Photographer: Dhiraj Singh/Bloomberg , Bloomberg

(Bloomberg) -- The Reserve Bank of India has bought the most dollars among its Asian peers recently, a sign that the central bank may be worried about a sovereign credit downgrade, according to Australia & New Zealand Banking Group Ltd.

It purchased $30 billion of foreign exchange in the four months to July to bolster what is already the world’s fifth-largest FX hoard, according to estimates by Khoon Goh. That accounts for more than half of Asia ex-China’s $55 billion intervention during the period, the ANZ analyst said.

“The persistent intervention even when the Indian rupee had not been under strong appreciation pressure represents a change in the RBI’s forex policy,” the Singapore-based head of Asia research at ANZ, wrote in a note. This could reflect a “desire to build a bigger buffer amid India’s deteriorating fiscal position to safeguard against a further downgrade in the sovereign rating.”

With 4.8% losses this year, the Indian rupee is the second-worst performer among emerging Asian currencies. Bank of America estimates that RBI will buy $45 billion of forex this fiscal year, of which $34.2 billion is already scooped up, the lender said in a note last week. The persistent intervention though, may place India back on the U.S. Treasury’s semi-annual forex monitoring list soon, according to ANZ.

The RBI may also be seeking to improve India’s appeal as a manufacturing base, ANZ said.

“RBI will continue to buy USD during periods of strong inflows,” said Kaushik Das, chief India economist at Deutsche Bank AG. It wants to “to prevent an appreciation in rupee in real effective exchange rate terms, which could hurt export competitiveness, and to strengthen reserves adequacy position further.”

(Updates with Bank of America estimates in fourth paragraph)