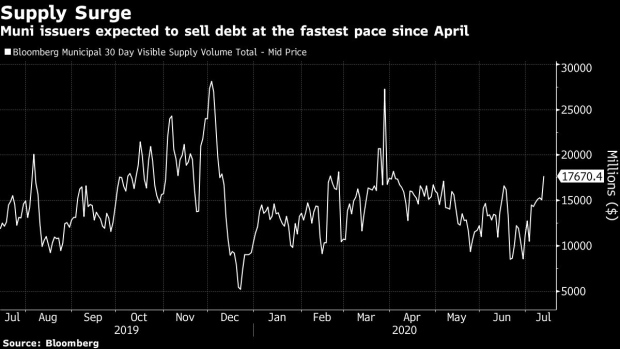 A server wearing a protective mask assists a diner at a restaurant in Houston. Photographer: Callaghan O'Hare/Bloomberg , Bloomberg

(Bloomberg) -- Even the biggest wave of municipal-bond sales since the end of the coronavirus crash may not be enough to satisfy investors.

State and local governments are scheduled to issue $17.7 billion in bonds over the next 30 days, the heaviest schedule since April 2, according to data compiled by Bloomberg.

Yet, that’s still far less than the $27 billion of securities that are set to be paid off, providing bondholders with a large amount of cash to reinvest. At the same time, mutual funds have picked up more than $1 billion of new cash every week since late May, according to Refinitiv Lipper US Fund Flows, further adding to demand.

Citigroup Inc. municipal strategists led by Vikram Rai wrote in a note Monday that the mismatch between supply and demand is likely to keep yields low.

“Technicals remain favorable at least for the next two months and we expect that the municipal market, including taxables, will remain well supported,” Rai wrote. He said that muni yields are unlikely to increase “even during strong supply” though they may not be able to keep pace with Treasuries.

Ten-year benchmark municipals are yielding 0.79%, the lowest since at least 2011, and a gauge of 20-year yields is hovering near a more-than six decade low.

With interest rates down so much, government agencies have sold $205 billion of municipal bonds so far this year, 19% higher than the same period a year ago, according to data compiled by Bloomberg.

But most of that is attributable to a surge in the sale of taxable securities, helping to fuel a relative scarcity in tax-exempt bonds, as rates hold low enough that borrowers are choosing to avoid the federal regulations that come with traditional municipal bonds.

Citigroup estimates that taxable issuance will be the highest since a record $152 billion was sold in 2010, when the federal government was subsidizing the payments on Build America Bonds to help jump-start the economy.

The taxable bond-sales boom is a positive for the market because it is attracting new investors and helping to diversify the traditionally concentrated buyer base, Citi says.

“In the longer run, a larger buyer base will likely lead to a more stable funding costs,” Rai wrote.