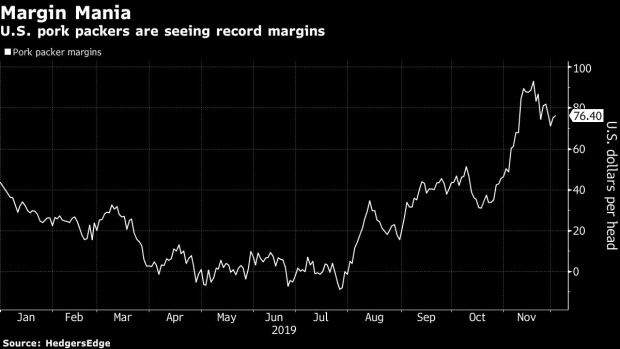 Three-month-old pigs stand in a pen at the Paustian Enterprises farm in Walcott, Iowa, U.S., on Tuesday, April 17, 2018. China last week announced $50 billion worth of tariffs on American products including soybeans and pork in retaliation for President Trump's plan to impose duties on 1,333 Chinese products. Photographer: Daniel Acker/Bloomberg , Bloomberg

(Bloomberg) -- The biggest U.S. hog herd since World War II is keeping live-animal prices muted even as a record number of pigs are being slaughtered to meet booming global demand.

After a deadly disease decimated pigs in top consumer China as well as other parts of Asia, American hog farmers were expected to benefit from rising exports to fill a protein shortfall. However, while slaughter estimates in the U.S. touched a daily record on Monday, prices for live animals are at the lowest ever for the season in government data going back to 2003.

Producers aren’t able to capitalize on the increase in demand because of ample supply in the U.S. Earlier this decade, American hog farmers responded to more imports by China, higher prices, new meat packing plants and low animal feed costs by expanding their herds. That years-long drive has now left them with the most number of pigs since 1943.

The U.S. hog herd totaled 77.678 million head on Sept. 1, according to data from the U.S. Agriculture Department. The agency is due to update that estimate on Dec. 23. Live-animal prices are at just 43.57 cents a pound, down 9% from a year ago, government data showed Monday. Hog slaughter estimates touched 497,000 head.

While China is purchasing record amounts of the meat because the African Swine Fever disease obliterated its herds, American pig producers are concerned by the uncertainty surrounding the trade war between Washington and Beijing. The long-running dispute has disrupted purchases of U.S. products by consumers in the prized Asian market.

“We’re optimistic that we will get a trade deal, but it keeps getting kicked down the road,” Don Roose, president of Iowa-based brokerage U.S. Commodities Inc., said by phone. “They are buying pork, but it’s not enough.”

There are some winners. Booming exports along with cheap, plentiful animals is proving a perfect recipe for processors. Pork packers have been seeing record margins, and thus have the incentive to process every animal they can.

To contact the editors responsible for this story: James Attwood at jattwood3@bloomberg.net, Pratish Narayanan, Reg Gale