U.S. banks had only a few weeks’ experience with the full-blown pandemic when they last tried to forecast how bad things would get. Now, they’re about to reveal what three more months of COVID-19 did to the industry.

Second-quarter results, set for release next week, will probably show that the trends that took hold at the start of the year only intensified: surging provisions for loan losses and slumping consumer spending, with trading gains helping some banks weather the storm.

“We’ve got a full three months of the pandemic coming through the numbers now,” Kyle Sanders, an analyst at Edward Jones, said in an interview, adding that the second quarter was probably the worst for bank earnings since the financial crisis. “The first quarter was rough, but it really only reflected a couple of weeks in March.”

Soaring unemployment left many consumers unable to pay back their debts or take on new borrowing, forcing banks to set aside more to cover souring loans and crimping their net interest income. At the same time, nationwide stay-at-home orders left once-bustling downtowns and retail districts deserted through much of April, May and June, which probably hurt a cornerstone of banks’ growth in recent years: service charges and credit-card fees. 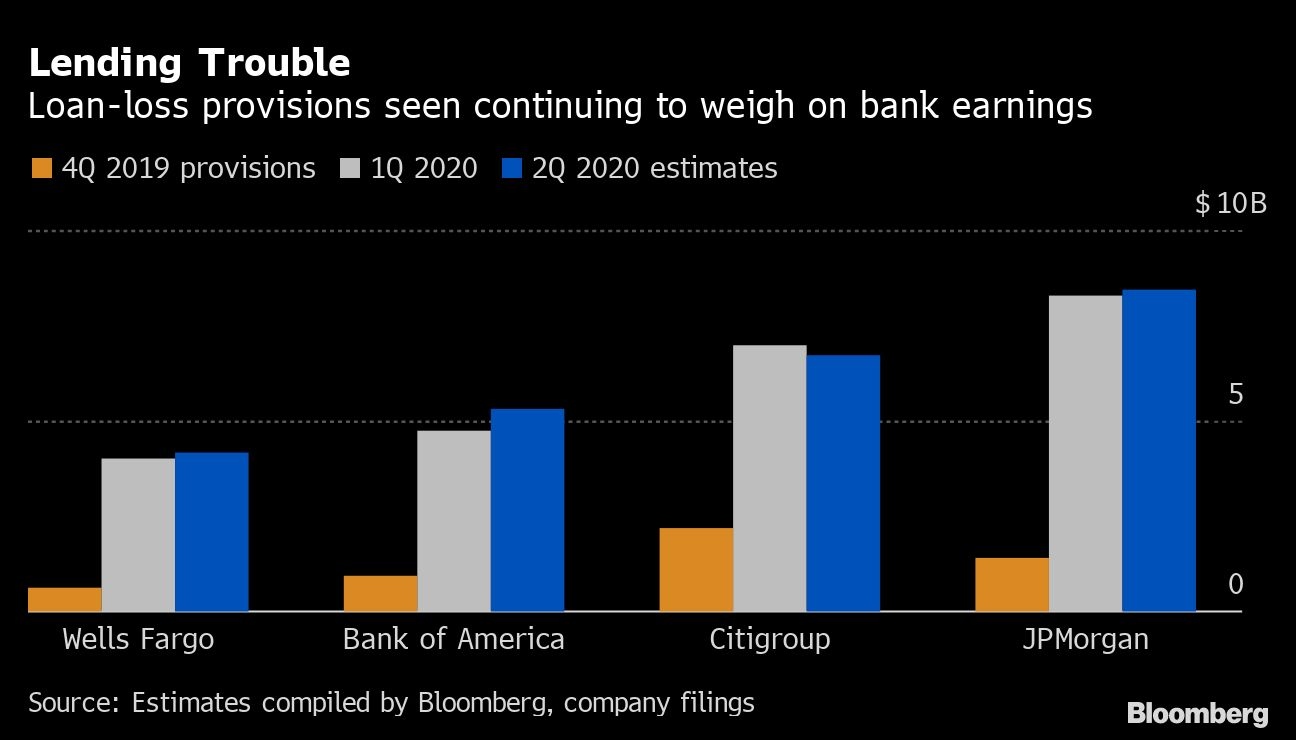 Shares of the companies reflect how rough this year’s crisis has been on the banks. The S&P 500 Financials index has slumped 26 per cent since the end of December, compared with a drop of just 2.4 per cent for the broader S&P 500. Wells Fargo & Co. is the year’s biggest loser among major banks, tumbling 55 per cent.

Most firms probably set aside even more provisions than in the first three months of the year, and combined earnings at the four biggest U.S. banks will be the lowest in more than a decade, based on estimates compiled by Bloomberg.

For Wells Fargo, already struggling under the weight of a series of scandals before the pandemic hit, second-quarter earnings could be the worst since at least the financial crisis. The company will disclose how deep it has to cut its dividend when it releases results next week, and people familiar with the matter said the San Francisco-based bank is also readying thousands of job cuts for later this year.

Wells Fargo Chief Financial Officer John Shrewsberry said last month he expected the bank to set aside more for bad loans in the second quarter than the US$4 billion tally for the previous three months, which itself was the most in a decade. For the industry as a whole, loan-loss provisions are poised to reach their highest levels since the financial crisis, according to analysts at Barclays Plc.

Trading and underwriting will likely be the silver lining for most banks, as a global hunt for liquidity drove up fees in the second quarter, according to analysts’ estimates.

Combined stock- and bond-trading revenue at the five biggest banks probably jumped 31 per cent from the second quarter of 2019, the estimates show, with JPMorgan Chase & Co. seen posting the biggest increase. The bank expects trading revenue to climb about 50 per cent from a year ago, co-President Daniel Pinto said in June.

Banks’ revenue streams have remained much healthier in this crisis than in previous ones, Credit Suisse Group AG said in a report. Previous cyclical downturns saw investment-banking and trading revenue drop as much as 30 per cent, according to the report.

U.S. investment-grade corporate bond issuance more than doubled in the second quarter from a year earlier, to US$757.7 billion, according to data compiled by Bloomberg. High-yield sales jumped 61 per cent to US$130.1 billion.

Mortgages are set to be another strong spot for banks in the second quarter as historically low interest rates spur homeowners to refinance. U.S. refinancing activity has almost doubled from last year, according to the Mortgage Bankers Association. The average rate for a 30-year mortgage has tumbled to 3.03 per cent.

Lenders sell most of the loans they make, and the spread between what they charge borrowers and what they’re able to sell the loans for was at its widest in April since 2008. Also that month, a measure of lenders’ profitability maintained by the Urban Institute hit a record high.

The outlook now depends on whether businesses continue reopening, or if a resurgent virus in the Sun Belt and other regions forces another nationwide shutdown. States that faced the initial brunt of the pandemic in March and April have managed the spread of the virus, but new outbreaks in states such as Texas and Arizona are stoking fears of a second wave.

While banks’ net income will continue to face a substantial hit, the crisis is still expected to be one that brings temporary earnings pain rather than existential capital concerns, Royal Bank of Canada said in a report.

“Our outlook is cautiously optimistic as we expect the economy to continue to gain momentum into the end of the year,” RBC said in the report.

--With assistance from Hannah Levitt