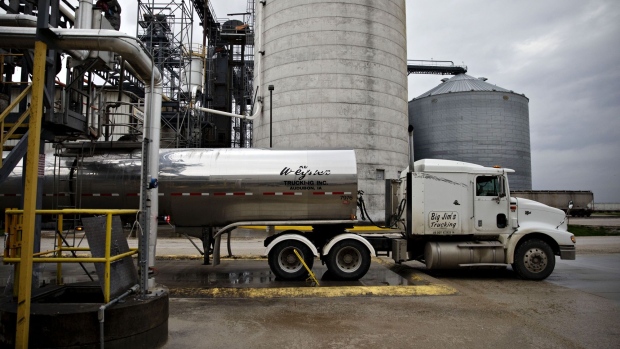 A tanker truck sits outside the POET LLC ethanol biorefinery in Gowrie, Iowa, U.S., on Friday, May 17, 2019. Stockpiles of U.S. corn ethanol sank to the smallest since July even as production of the biofuel climbed, Department of Energy data showed on Wednesday. , Bloomberg

(Bloomberg) -- The top U.S. ethanol maker is looking to separate climate-friendly grains from the environmental slackers.

Poet LLC said it plans to use Gradable, a digital platform owned by startup Farmers Business Network, at its 33 ethanol plants. The tool is able to rate corn used to make biofuel based on its so-called carbon intensity.

The idea is to encourage more sustainable farming and help growers track their greenhouse-gas data, ultimately enabling them to get a premium for crops through low-carbon fuel markets. Programs already in California and spreading worldwide are expected to put higher value on such fuel ingredients to encourage lower global warming emissions.

“Based on our trials, the carbon intensity of corn production is all over the board, with farmers in the same region using different practices that yield widely varying results,” Bob Whiteman, chief financial officer for Poet’s biofuels division, said in an interview.

Sioux Falls, South Dakota-based Poet currently supplies about 280 million gallons of ethanol per year into California. There is currently a push for the state to alter how its values feedstocks in its low-carbon fuel program, which is already serving as a model in other regions and eventually could be mirrored in a nationwide system.

“We want to be prepared for when these markets come online,” Devin Lammers, president of Gradable, said. “If we wait it will take years to put the infrastructure in place.”

The Gradable platform allows farmers to submit information including nitrogen fertilizer use, which makes up the biggest share of global warming pollution tied to grain production, according to the companies. FBN says it doesn’t share farm data with grain buyers.