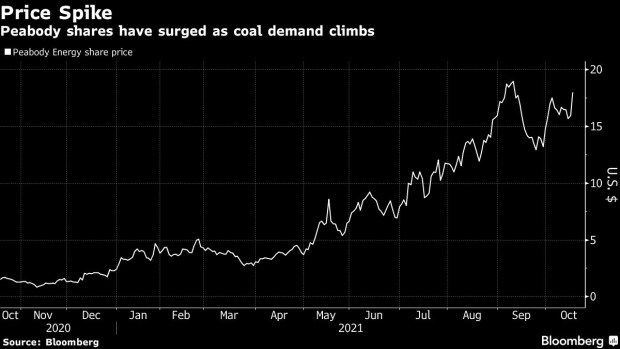 Sales exceeded $900 million, the highest in seven quarters, and adjusted earnings before interest, taxes, depreciation and amortization of $280 million to $290 million will be triple the year-ago figure, according to preliminary earnings released Monday by the biggest U.S. coal miner.

The results bode well for U.S. miners, which are heading into earnings season buoyed by increasing consumption at domestic utilities, higher demand for international shipments and prices climbing around the world. The global economic recovery has increased electricity consumption, leading to a shortage of natural gas and strong demand for coal. While world leaders will converge in Glasgow in two weeks for a critical climate conference, the dirtiest fossil fuel will remain the world’s biggest source of power for years to come.

Peabody surged as much as 17% in New York, the most intraday since July. The shares have surged more than sevenfold this year as demand for coal has climbed. The company will issue its full third-quarter results on Oct. 28.

Peabody is the first U.S. coal producer to provide results for the quarter. Rivals may also report solid gains as power producers around the world are calling for more coal to head off potential shortfalls. U.S. miners are shipping as much as they can dig up, though their ability to increase production is constrained by labor shortages and mining capacity that’s been in decline for years.

Elliott Investment Management, the company’s top shareholder, reduced its stake after exercising short call options, according to a filing Monday.