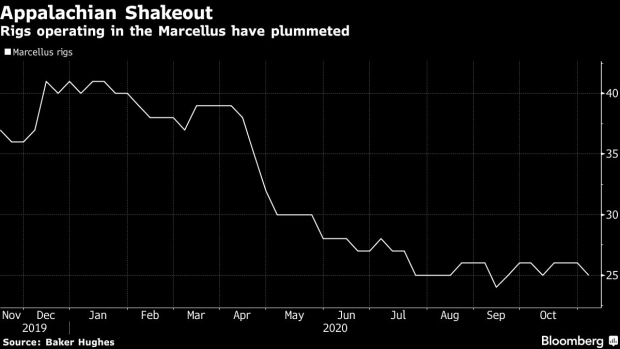 (Bloomberg) -- EQT Corp. indicated it’s not done yet with driving consolidation in the fragmented Appalachian natural gas industry, two weeks after agreeing to buy Chevron Corp.’s assets in the region for $735 million.

The U.S.’s largest gas producer is no longer in growth mode and acquisitions are a way to gain economies of scale and help it return capital to shareholders, according to EQT Chief Executive Officer Toby Rice. He added that there’s “certainly industrial logic” in a potential merger with CNX Resources Corp. and other peers in the sector, while declining to comment on any specific potential deal.

“We are firm believers that consolidation is going to be the next step change in value creation for our shareholders,” Rice said in an interview Wednesday. The executive said there are some 50 operators running 30 rigs in the Appalachian basin, the gas-rich region stretching from the southern U.S. to New York. “You can see how that’s really not efficient.”

The recent wave of shale mergers has largely involved oil companies against a backdrop of depressed crude prices and investor demands that the industry slash costs and prioritize cash flow over production. Shale gas producers such as EQT are in a somewhat better position following a gradual recovery in prices.

Several days prior to the Chevron deal, Bloomberg News reported EQT was pursuing a takeover of Appalachian producer CNX, which currently has a market value of about $2.2 billion. CNX shares rose as much as 8.3% in New York trading.