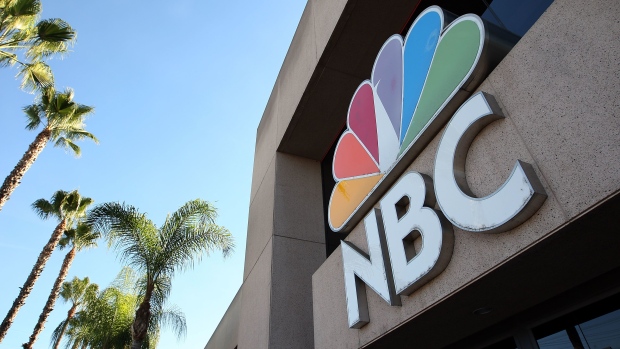 BURBANK, CA - DECEMBER 01: An NBC sign stands at the NBC studios on December 1, 2009 in Burbank, California. A tentative agreement has been reached to sell Vivendis 20 percent stake in NBC Universal to General Electric (GE) for about $5.8 billion. Analysts expect GE, the primary owner of NBC for more than two decades, to sell its ownership interest to Comcast. (Photo by David McNew/Getty Images) , Photographer: David McNew/Getty Images

(Bloomberg) -- Bill Cosby was sued by five women for sexual offenses under a New York law that lifted the statute of limitations on such claims for the next year, creating fresh legal troubles for the embattled American actor.

The suit, filed Monday under the Adult Survivors Act, which took effect last month, also names NBCUniversal Media, which aired The Cosby Show and A Different World. The company is accused of negligence for allegedly turning a blind eye to Cosby’s conduct in the late 1980s and early 1990s.

The plaintiffs include two women who had roles in the popular TV shows. Lili Bernard alleges Cosby drugged and raped her before threatening to blacklist her from the industry if she resisted; Eden Tirl alleges she was regularly forced to eat lunch with Cosby alone in his dressing room on production days, and that he sexually assaulted her on one such occasion. Most of the incidents in the complaint involve Cosby allegedly using his popular TV shows to lure young aspiring actors into his circle before getting them alone.

Cosby, 85, has consistently denied the allegations.

“The lawsuit is no surprise as state legislatures continue to abolish statutes of limitations,” Cosby lawyer Jennifer Bonjean said in an emailed statement. “We will vigorously defend each and every accusation brought against Mr. Cosby.”

Cosby was freed from prison in June 2021 after his conviction for sexually assaulting a Temple University employee in 2004 was overturned by Pennsylvania’s highest court, upending a prosecution that became an emblem of the #MeToo movement. By then, the actor had served two years, nine months of a prison sentence of up to 10 years.

In the earlier case, the Pennsylvania Supreme Court ruled that the state violated Cosby’s rights when it failed to follow through on an agreement not to prosecute him. The court said Cosby can’t be retried on the charges.