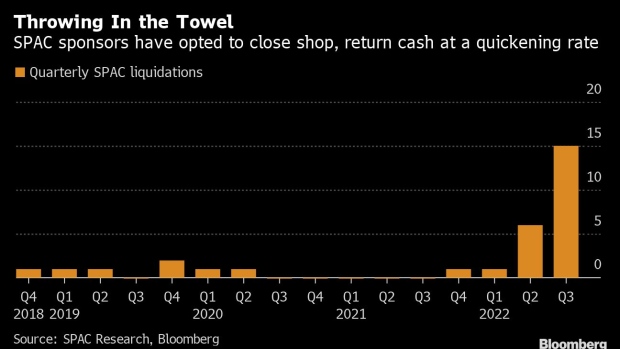 (Bloomberg) -- Serial SPAC dealmaker Bill Foley is the latest industry heavyweight to call it quits as he seeks to give investors back the roughly $2.1 billion he raised for a pair of vehicles.

Austerlitz Acquisition Corporation II, which raked in $1.38 billion and was among the largest outstanding blank-check firms, and Austerlitz Acquisition Corporation I, which raised $690 million, are looking to shut down before the end of the year, according to a filing with the US Securities and Commission on Monday. The two had set March deadlines to complete mergers when they debuted last February.

The sponsors, who helped lead at least four successful special-purpose acquisition company mergers, partly blamed the decision on the poor performances of the SPAC and traditional initial public offering markets. They reviewed hundreds of potential mergers and had “substantive negotiations with dozens of them,” according to a press release. Some potential targets opted to sell themselves or go public via IPOs.

Foley joins a growing list of sponsors including “SPAC King” Chamath Palihapitiya and billionaires Bill Ackman and Sam Zell who have abandoned their vehicles this year as the markets for SPACs and global equities have been rocked by volatility. At least 22 blank checks have liquidated in 2022, more than double the total seen over the five previous years, data compiled by SPAC Research show.

The Foley-led sponsorship team is seeking a shareholder vote sometime next month and will look to dissolve as promptly as possible upon approval, the filings show. Both SPACs expect to return $10 per share to investors.

SPACs are known as blank checks because they raise money in IPOs with the goal of taking an unidentified company public. They give themselves a short window, typically two years, to buy something or return the cash to investors. Management teams can get short extensions to find and close deals, but they usually have to get shareholder approval and pay them to do it.

Foley will not be the last sponsor to call it quits. Almost 550 SPACs are still looking for targets to deploy the roughly $145 billion in cash they raised, according to SPAC Research. There are still 107 SPACs waiting to go public and raise an additional $17 billion, the data show.

The SPAC ecosystem has been hammered by a broader rout in more speculative assets amid concerns about increased oversight from the SEC. The De-SPAC Index is down 63% this year compared with a 21% drop in the S&P 500 Index, as the companies that have gone public through blank-check firms struggle. All told, nearly one-third of the roughly 400 companies that merged with a SPAC are now trading below $2 a share.