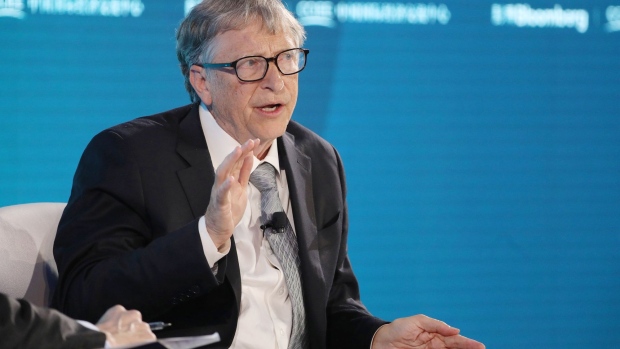 Bill Gates, co-chair of the Bill and Melinda Gates Foundation, speaks during the Bloomberg New Economy Forum in Beijing, China, on Thursday, Nov. 21, 2019. The New Economy Forum, organized by Bloomberg Media Group, a division of Bloomberg LP, aims to bring together leaders from public and private sectors to find solutions to the world's greatest challenges. Photographer: Takaaki Iwabu/Bloomberg , Bloomberg

Bill Gates, already the world’s second-richest person, got an added boost Tuesday as his investment in used-car platform Vroom Inc. more than doubled on the company’s first day of trading.

Shares of New York-based Vroom soared 118 per cent to US$47.90 apiece, lifting the value of Gates’s roughly six per cent holding by more than US$175 million. The Microsoft Corp. co-founder, who owns the stake through Cascade Investment, ended the day with a net worth of US$115.1 billion, according to the Bloomberg Billionaires Index, a ranking of the world’s 500 richest people. He trails only Amazon.com Inc. founder Jeff Bezos, whose fortune climbed by US$4.3 billion on the day to US$156.2 billion.

It was the second straight day of eye-popping returns for investors in the automotive industry. On Monday, shares of Tesla Inc. competitor Nikola Corp. more than doubled, and the maker of hydrogen-powered trucks climbed an additional 8.8 per cent Tuesday, boosting founder Trevor Milton’s net worth to US$9.8 billion.

While demand for used cars has weakened during the pandemic, Vroom sold more units in March and April than in any previous two-month period, according to filings. Last week, Nikola said pre-orders for its vehicles topped US$10 billion and that it expects to start generating revenue in 2021.