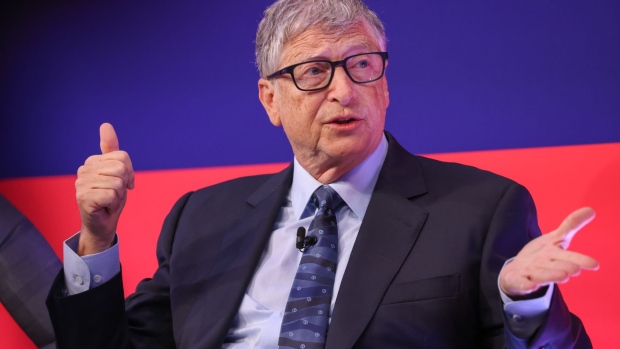 Bill Gates, co-chairman of the Bill and Melinda Gates Foundation, during the Global Investment Summit (GIS) 2021 at the Science Museum in London, U.K., on Tuesday, Oct. 19, 2021. , Bloomberg

A Massachusetts-based startup that captures carbon dioxide directly from the air has raised US$80 million from investors, including Bill Gates-led Breakthrough Energy Ventures.

Founded in 2019, Verdox Inc.’s technology is still only operable at lab scale. But Chief Executive Officer Brian Baynes says that a recent breakthrough with the key material used to trap the greenhouse gas has given investors confidence to invest such a large sum at an early stage in the startup’s development.

As the world gets serious about reaching net-zero emissions within decades, there’s growing interest in technologies that can permanently sequester CO₂ already in the atmosphere. Nature-based offsets such as forests have become a wildfire risk—ironically due, in part, to climate change—and could release any CO₂ they might have stored. Direct air capture technology offers more hope that the offset will do away with the promised amount of greenhouse gas for thousands of years.

Carbon capture works by separating CO₂ from the air or exhaust gases from factory smokestacks. The majority of current technologies use liquid solvents that attract CO₂ like a magnet pulls iron filings. Once the liquid captures the gas, it’s heated to a temperature that allows the the CO₂ to be released. The CO₂ can then be compressed and injected deep underground for permanent storage. All these steps take a huge amount of energy, which contributes to making the technology expensive. Despite decades of work, the cost of this conventional approach remains too prohibitive to scale up to capture the hundreds of millions of tons of CO₂ annually needed to put the world on a path to net zero.

Verdox has a different approach that it claims to be more efficient and therefore cheaper. The Massachusetts Institute of Technology spinoff has developed a special type of plastic that can selectively pull out CO₂ from a mix of gas—in air or exhaust—when charged with electricity. Once trapped, a change in voltage releases the CO₂. The startup said its material could cut the total energy used in direct air capture by 70 per cent or more. The startup will have to rely on low-carbon electricity to power the process.

An early version of the material, developed at MIT, worked well at capturing CO₂ but it also ended up capturing oxygen. Air is composed of 21 per cent oxygen and only 0.04 per cent CO₂. But in the past year, Verdox has landed on a material that Baynes said is 5,000 times more attractive to CO₂ than oxygen. “That’s the most significant accomplishment in the last two years,” said Baynes. He declined to share any other details about the material.

A lot of the work that got Verdox to this point “was pretty darn close to fundamental research,” said Eric Toone, technical lead at Breakthrough Energy Ventures, which has invested in two other carbon capture startups, Sustaera Inc. and Heirloom Carbon Technologies.

Verdox is now racing to compete against other carbon-capture startups that began developing their technologies more than a decade ago. Two of them – Canada’s Carbon Engineering Ltd. and Switzerland’s Climeworks AG – have since raised more than US$100 million each, according to Crunchbase, and laid out plans for scaling the technology to capture millions of tons annually. Another competitor, U.S.-based Global Thermostat, has struggled and it announced last week that it will replace its CEO who had been accused of mismanagement.

It will take years before Verdox can capture millions of tons of CO₂ annually, but it eventually aims to do so at US$50 per ton or less. That would be an attractive price, given  carbon permits in the European Union’s Emissions Trading System have traded this year around 80 euros (US$90) a ton. But it’s a very ambitious target considering Climeworks is currently selling carbon offsets for US$1,200 per ton.

Verdox has spent about US$4 million on research and development so far, which it raised from government grants and smaller investors. In addition to Breakthrough Energy Ventures, Prelude Ventures and Lowercarbon Capital participated in the recent funding round.

The new funding should be enough capital for four or five years, Baynes said. Some of it will be spent building three prototypes in 2022 that could capture as much as 100 kilograms of CO₂ a day, which is about 35 tons in a year. One prototype aims to directly capture CO₂ from the air, whereas the others will trap it from factories. Baynes wouldn’t name the companies where the prototypes will be built, but said that one was an oil company in the U.S. and another a metals company in Europe.