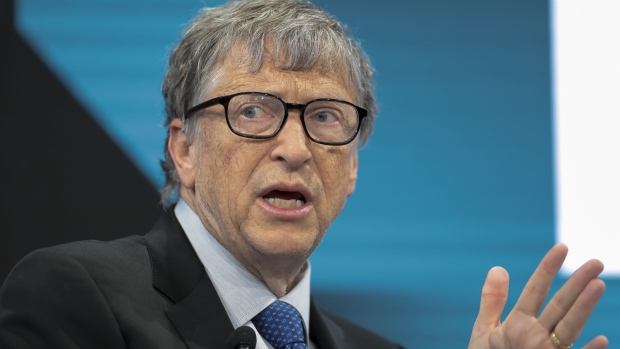 Bill Gates, billionaire and co-chair of the Bill and Melinda Gates Foundation, gestures as he speaks during a panel session on the opening day of the World Economic Forum (WEF) in Davos, Switzerland, on Tuesday, Jan. 22, 2019. World leaders, influential executives, bankers and policy makers attend the 49th annual meeting of the World Economic Forum in Davos from Jan. 22 - 25. , Bloomberg

Asked by the BBC whether he had bet against the electric-vehicle pioneer, Gates said the move had nothing to do with climate change.

“The popularity of electric cars will lead to more competition for selling those cars,” Gates said in an interview on the BBC Today program. “So there’s a difference between electric cars being adopted, and companies becoming infinitely valuable.”

While both Musk and Gates donate heavily to climate-protection causes, the two have a long history of public spats, with disagreements on issues including the pandemic, electric trucks and cryptocurrencies.

“There’s no need for him to be nice to me,” Gates said of Musk.