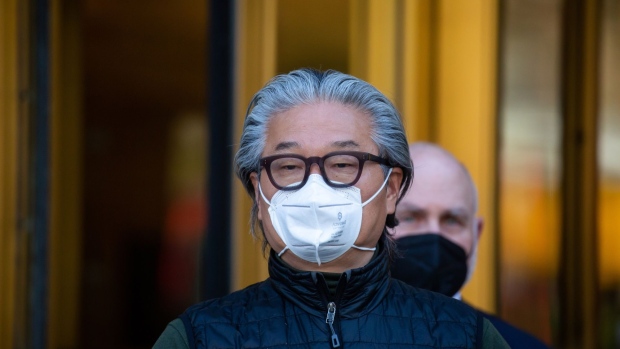 (Bloomberg) -- Before Bill Hwang sent a slate of stocks on a manic climb last year, he had already started bleeding billions of dollars on a bearish bet after seeking Morgan Stanley’s help.

It’s an untold chapter that played out just before Hwang’s famously bullish trades came tumbling down in early 2021, wiping out his Archegos Capital Management and leading to criminal charges. Months before all of that, Archegos was trying to exit a wager against a Chinese online broker and sought help from Pawan Passi, the Morgan Stanley banker facing close scrutiny in a US probe of whether Wall Street is too loose-lipped when handling big trades.

Hwang had placed a massive short bet on Futu Holdings Ltd. using swaps, and wanted to close out his position around the end of 2020. He told Morgan Stanley he needed to buy a large block of shares to unwind the position, according to people with knowledge of the episode. But before Hwang managed to defuse the bet, Futu’s price skyrocketed, gaining more than 400% in the two months after that Christmas. That jump took an almost $4 billion bite out of Hwang’s portfolio.

Archegos alerted US authorities to that costly episode after the emergence of the block-trading probe this year, one of the people said. The firm has sought a review of whether someone at the bank might have tipped off outsiders to its plan to buy Futu stock in bulk.

Indeed, it remains unclear who squeezed Hwang’s short bet and whether they even knew they were targeting him. Futu’s price surge coincided with last year’s so-called meme stock frenzy, in which an army of retail traders organized themselves on message boards and set out to identify and lift shares targeted by short sellers.

Still, the review sought by Archegos is yet another way that big US probes of Wall Street keep intersecting. The government’s examination of whether financial firms are handling blocks discreetly was underway for a while before it ramped up in the wake of Archegos’s collapse and liquidation, people with knowledge of the matter have said. Now, Hwang is looking to make another link, turning the scrutiny back toward banks.

The US investigation of block trades does focus on whether Wall Street bankers have tipped off hedge funds to any pending deals. But Morgan Stanley, which has said it’s cooperating, hasn’t had any discussions with the government about a potential Futu transaction with Archegos as part of that inquiry, a person with knowledge of the matter said.

Neither Passi nor the bank has been accused of wrongdoing. Representatives for Morgan Stanley, Archegos and the Justice Department all declined to comment. Passi didn’t return a request for comment.

Ironically, within weeks of getting burned on Futu, Hwang became the scourge of other short sellers by driving up the price of Chinese online-education company then known as GSX Techedu Inc., which some of the world’s most famous short sellers were betting against. When Hwang was eventually outed as their antagonist, they cursed his name and publicly called for probes into that, too.

Passi canvassed the market through parts of January 2021. In the end, Morgan Stanley didn’t manage to acquire a large enough block of Futu’s stock to help Archegos unwind its ill-fated bets, the people said. The hit to Archegos’s portfolio was soon dwarfed by its highly leveraged gains on almost every other part of its portfolio, which in relatively short order soared, sputtered and crashed.

The Archegos and block-trading probes do have a common theme -- seeking to head off fraud and manipulation, US Securities and Exchange Commission Chair Gary Gensler noted in an interview last week. “It’s about protecting markets,” he said.

For a time after Archegos’ collapse, some in the market suspected Hwang was the one who had driven up Futu so spectacularly at the start of 2021. After all, that move traced the arc of his bullish bets. But in this case, the Justice Department’s investigation found he was on the losing side of the surge.

A brief nod to that trade is buried in the indictment prosecutors unveiled against Hwang in April -- charges that he is fighting. A single line notes he shorted Futu, betting the Hong Kong-based brokerage platform would lose value, and identifying it as one of the top positions in his portfolio. Hwang’s bet against a single stock was a rarity. His long-short strategy generally placed highly concentrated bets on stocks he was convinced could rise, which he then hedged by shorting exchange-traded funds tied to indexes.

Futu got its listing on the US market with a stock offering in 2019. The company, seen as the Chinese take on Robinhood, soon benefited from a retail investing mania that took hold during early Covid-19 lockdowns.

By the start of November 2020, the price had more than doubled from the IPO to around $30. But in just over three more months it jumped to $191. It even raised $1.24 billion in April 2021 after selling shares at $130 apiece. Since then, the stock has crumbled.

Hwang had initially sought out another Morgan Stanley executive who referred him to Passi, according to people with knowledge of the conversations. Passi remained in close contact with Archegos head trader William Tomita about the status of his efforts. Tomita is one of the Archegos executives who is cooperating with the DOJ in its Archegos case.

It’s not clear when Archegos began setting up its bet against Futu or how it structured the trade. The firm often favored the use of swaps. But its $4 billion hit from the trade is startling -- a figure that almost equaled Futu’s total market capitalization in late 2020.

That speaks to the dangers of short-selling. An investor who buys a stock is limited in how much they might lose: the value of that stake. But an investor who shorts a stock -- especially with leverage -- can lose multiples of what they paid to set up the trade, if the price climbs dramatically.

Prosecutors described Archegos’s final weeks in their indictment. By last March, the firm’s attempts to artificially prop up a highly leveraged and unusually concentrated portfolio of bullish bets lost steam, according to the government. As prices started slipping, Hwang and colleagues allegedly stepped up efforts to manipulate prices and avoid margin calls, and then misled banks about the brewing crisis at the firm until everything came crashing down.