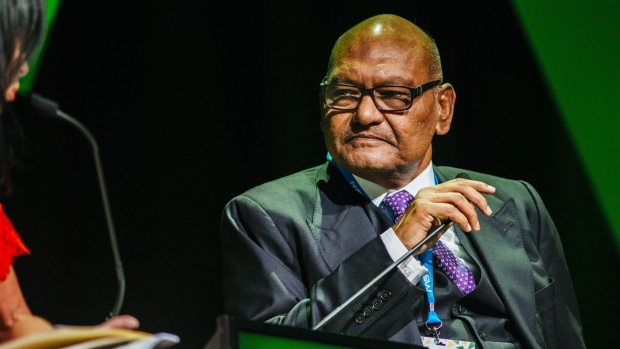 Anil Agarwal, billionaire and owner of Vedanta Resources Plc, looks on during a panel discussion on the opening day of the Investing in African Mining Indaba in Cape Town, South Africa, on Monday, Feb. 5, 2018. Mining executives, investors and government ministers are meeting in drought-hit Cape Town for the African Mining Indaba, the continent’s biggest gathering of one of its most vital industries. , Bloomberg

(Bloomberg) -- Sterlite Technologies Ltd., an Indian maker of optical fiber and telecom cables, is expecting a 25% surge in annual sales by March 2023, boosted by exports as well as a homegrown push for the newly rolled 5G services.

The Pune-based company, controlled by a firm of billionaire Anil Agarwal who set up the Vedanta Group, is eyeing sales of as much as 72 billion rupees ($884 million) for the current fiscal year, Ankit Agarwal, company’s managing director said in an interview in New Delhi. Sterlite Tech posted sales of 57.54 billion rupees for the year ended March 2022.

Sterlite, which earns a little under 60% of its revenues from overseas markets, is expecting local sales to jump. Indian wireless carriers, including the one led by Mukesh Ambani, Asia’s second-richest person, plan to fork out billions of dollars as they kicked off their 5G networks earlier this month in the country of a 1.4 billion people with more than 600 million smartphone users.

Sterlite Tech plans to invest 8 billion rupees by March 2024 to increase fiber cable manufacturing to meet the expected demand surge, according to Ankit Agarwal who is part of the Vedanta Group founder’s family.

Even though India is the last large Asian market to get on to the 5G bandwagon -- South Korea was the first to roll it out three years ago -- telecom firms and equipment makers are bullish on the high-speed wireless technology that’s touted to revolutionize everything from gaming to manufacturing and health care.

Ambani’s Reliance Jio Infocomm Ltd., India’s largest wireless operator, will provide the 5G network to the entire country by December next year, while No.2 rival Bharti Airtel Ltd. plans to do so by 2024. The only other local private sector operator, Vodafone Idea Ltd., also aims to begin the rollout “soon.”

Billionaire Agarwal’s conglomerate is now looking to tap more opportunities around the telecom sector’s supply chain. One of his closely-held firms and Taiwan’s Hon Hai Precision Industry Co., also known as Foxconn which assembles most of world’s iPhones, are planning to build a chipmaking facility in western India.

Sterlite Tech wants to become one of the three largest optic fiber firms globally, according to Ankit Agarwal, and will continue selling its non-core assets to generate funds toward that goal.

“We want to do fewer things,” he said. “But we want to be world class at those.”