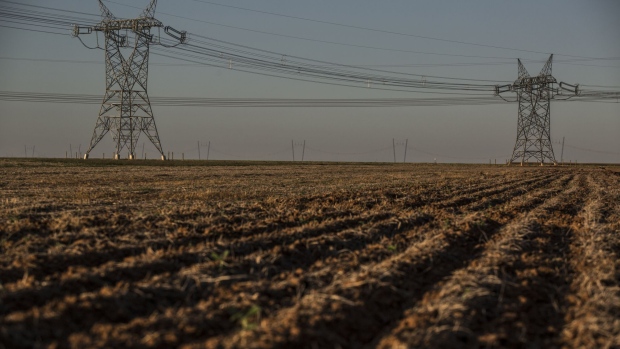 Electricity transmission towers stand on a field at a farm in Rosario, Bahia state, Brazil, on Wednesday, May 9, 2018. At the end of the last century, before the commodities boom brought a wave of development to Latin America, opposition to the blight of new electricity infrastructure was rare. People just wanted the energy. Now that 100 percent of the region's biggest economies have access to power, the "Not in my backyard" movement—or Nimby'ism—that has long been the norm from Europe to the U.S. is creeping in here, too. , Bloomberg

The company launched a formal review last summer following expressions of interest from a number of parties. Just Energy plans to remain independent, according to a statement Wednesday morning.

Shares of the energy utility sank as much as 29 per cernt intraday in Toronto, the most since March 20. Canadian billionaire Jim Pattison’s Great Pacific Capital Corp. owns about 16 per cent of the company, according to data compiled by Bloomberg. Pattison reported his stake in 2015.

Additionally, Just Energy announced a recapitalization plan, including $100 million in new equity commitment, and debt reduction by about $275 million.

“This comprehensive plan to strengthen and de-risk our business will result in a much stronger Just Energy, creating a sustainable capital structure,” CEO Scott Gahn said.

BMO Capital Markets provided a fairness opinion for the company’s recap plan, which is expected to be implemented in September.

“We believe the proposed reorganization plan is a positive development as it keeps the company solvent,” Nelson Ng, an analyst at RBC, told clients in a note.

The share consolidation leaves RBC skeptical. “However, the 1-for-33 share consolidation and the ‘New Equity Subscription Opportunity’ that gives stakeholders the right to purchase new shares at $3.412 per share implies a current price of around $0.10/share,” Ng said.