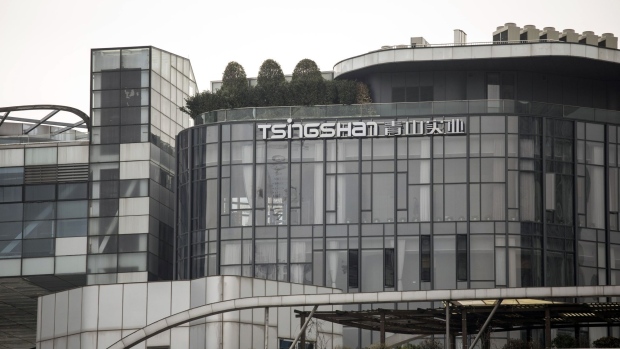 A Tsingshan Holding Group Co. office building in Shanghai, China, on Thursday, March 10, 2022. The Chinese nickel company at the center of a historic short squeeze has secured a package of loans from local and international banks to help it meet a wave of margin calls, according to people familiar with the matter. Photographer: Qilai Shen/Bloomberg , Bloomberg

(Bloomberg) -- Tsingshan Holding Group Co., the nickel giant owned by billionaire Xiang Guangda, is in advanced talks to sell some of its stainless-steel assets in Indonesia to China Baowu Steel Group Corp. as part of a strategic review, according to people familiar with the negotiations.

The talks started in April, and the assets for sale include production plants of stainless steel and nickel pig iron. A deal could be worth $3 billion to $4 billion, one of the people said, adding that the terms could change. The two sides have already agreed on several key terms and are currently discussing details such as operations and sales after the acquisition, the people said.

Xiang shot to prominence recently after his bets that nickel prices would fall caused a historic squeeze on the London Metal Exchange earlier this year. The decision to sell some of his Indonesian assets was triggered in part by Xiang’s rethinking of his company’s future during the short squeeze, when he faced billions of dollars in mark-to-market losses, said the people. A deal with Baowu would strengthen ties with one of China’s largest state-owned commodity producers while still allowing Tsingshan to retain substantial exposure to the steel business.

A representative for Baowu declined to comment in an email, while Tsingshan didn’t respond to multiple requests seeking comment.

A successful transaction would boost Baowu’s annual stainless-steel production capacity to over a combined 13 million tons by adding 1 million tons in Indonesia, according to Bloomberg’s calculation based on the company’s existing capacity and the plants that they’re in talks to acquire.

Baowu has also become China’s biggest stainless steel maker through a series of acquisitions in a consolidation push backed by the Chinese central government. It took over Shanxi Taigang Stainless Steel Co. in 2020 and has bought controlling stakes in other smaller Chinese domestic rivals over the past few years.

China is the world’s biggest stainless steel producing and consuming country, thanks to rapid economic growth in the past few decades that buoyed demand for everything from anti-corrosion equipments to home appliances to tableware. Self-made entrepreneurs like Xiang contributed to the surge in supplies by tapping a new method of making the alloy using laterite ores starting around 2000, which also cut production costs. Stainless steel is traditionally processed from refined nickel and carbon steel.

Xiang, known as “big shot” in Chinese commodity circles, attained fame for his audacity in placing big derivatives bets on nickel prices, but his shorts went spectacularly wrong amid an unprecedented price spike in the metal in March. Eventually, he walked away from the crisis as nickel prices fell after a series of measures taken by his banks and the London exchange. Xiang also told executives that his company had the support of the Chinese government, even though there was no clear evidence of intervention by authorities or state-owned enterprises to bail out of trouble.

Tsingshan’s decision to sell the Indonesian assets to Baowu was also made after years of close business ties with Chinese major steelmakers, the people said, adding that teaming up with Baowu is likely to bolster Tsingshan’s position and help ease cash-flow pressures, they added.

To be sure, Tsingshan will still retain its dominance in Morowali with more than 3 million tons of annual capacity left to itself after a sale, while Baowu will still be dependent on Tsingshan’s management in the industry park. As an early explorer of the site, Tsingshan has been a host in nickel-focused Indonesia for dozens of investors who followed later, including Zhejiang Huayou Cobalt Co. and Chinese battery metals maker GEM Co.

In the event of a deal, Baowu won’t be the only investor in Tsingshan’s industrial empire. Taiwanese metals fabricator Walsin Lihwa Corp. announced a deal to acquire 29.5% of a Tsingshan facility in Indonesia Weda Bay Industrial Park for $146 million earlier this month, following another similar deal involving a $200 million investment.

Xiang has been diversifying and expanding his businesses in recent years with a steel mill in Africa and a lithium plant in the South America. Ruipu Lanjun Energy Co., a Tsingshan unit that produces batteries for electric vehicles is seeking to list in Hong Kong this year.