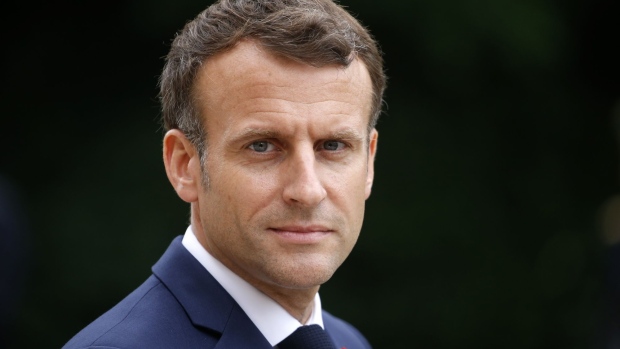 PARIS, FRANCE - JUNE 23: French President Emmanuel Macron listens to European Commission President Ursula von der Leyen (not pictured) during a joint press conference prior to their meeting at the Elysee Presidential Palace on June 23, 2021 in Paris, France.Ursula von der Leyen meets Emmanuel Macron to approve the French recovery plan, which provides for 100 billion euros intended in particular to overcome the consequences of the pandemic and to finance the ecological transition. Of this sum, 40 billion should be financed by the European Union. (Photo by Chesnot/Getty Images) Photographer: Chesnot/Getty Images Europe , Photographer: Chesnot/Getty Images Europe

The media ambitions of French billionaire Vincent Bollore could offer a boost to conservatives in next year’s election and pose a serious hurdle for President Emmanuel Macron’s chances of reelection.

Bollore already owns a channel sometimes dubbed “the French Fox News” which helped to build a national profile for far-right columnist and potential presidential candidate Eric Zemmour. Now he is expanding his media empire with a plan to acquire Lagardere SA, which owns Europe 1 radio, the Sunday newspaper Journal du Dimanche and Paris Match magazine. Bollore is making the acquisition through media company Vivendi SA, which he controls.

A spokesperson for Vivendi didn’t return a request for comment.

Bollore’s media companies have fueled discussion in France over insecurity, immigration and Islam, topics which have been seized on by the nationalist Marine Le Pen in her campaign to unseat Macron. The Lagardere deal needs to be completed by December next year and is set to face antitrust scrutiny.

“Bollore’s influence over political debates is already visible via CNews and Europe 1, and that’s likely to continue,” said Julia Cage, a professor of economics at Sciences Po in Paris who’s researched media ownership by billionaires. “All of that can happen very quickly, even before the operation is approved.”

CNews, another Vivendi TV station, often invites guests -- including members of Macron’s government -- to discuss themes such as drug trafficking in the streets of Paris or the role of Islam in society. This week, the channel asked Zemmour to step down from his program after the French watchdog said his air time should be subject to campaign limits because he is mulling a run for president.