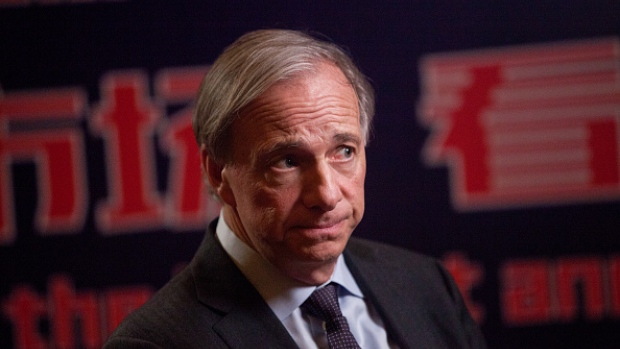 Ray Dalio, billionaire investor and founder of Bridgewater Associates, pauses during a Bloomberg Television interview at the Grand Hyatt in Beijing, China, on Tuesday, February 27, 2018. Central banks face a challenge getting things right a year or two down the road as they struggle to balance growth and inflation, Dalio said�during the interview. , Photographer: Bloomberg/Bloomberg

(Bloomberg) -- Ray Dalio, the billionaire founder of investment management firm Bridgewater Associates LP, said a gauge that measures conflicts around the world is at its highest level in more than 70 years.

“We created a conflict gauge -- various ways of measuring different conflicts -- and the conflict gauge now is the highest, really, since the war years,” Dalio said in an interview with CNN’s Fareed Zakaria that will air on Sunday. “There is more polarity, more conflict internally, of a sort.”

Investors and business leaders are watching the rise in populism and protectionism to assess their impact on global economic activity. In 2017, Dalio warned that populism will be a more powerful force than monetary or fiscal policies, with politics affecting markets as happened in 1937.

While he’s previously said inequality in the U.S. could stir up more conflict, Dalio cautioned in the CNN interview that the issue extends beyond the U.S. into other countries.

“If you look at Brazil, if you look at Mexico and if you look in many countries right now, worldwide, you see that there is more political extremism,” Dalio said, according to a transcript provided by the network. “It’s a negative for the economy.”