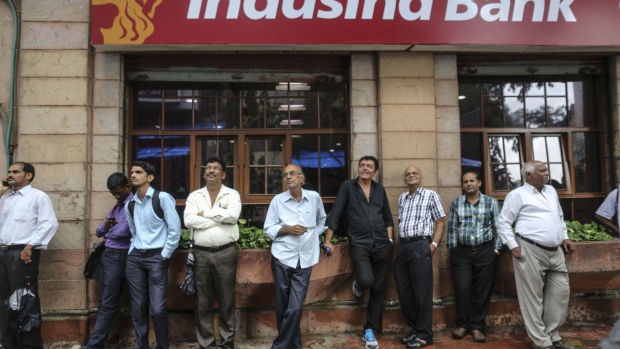 People stand outside a branch of IndusInd Bank Ltd., near the Bombay Stock Exchange (BSE) in Mumbai, India, on Wednesday, Oct. 5, 2016. Reserve Bank of India Governor Urjit Patel surprised many with a rate cut on October 4, signaling that faster expansion has become the priority even as inflation remains stubbornly higher than in the rest of Asia. Three government-appointed economists and two RBI colleagues joined Patel in a 6-0 vote in favor of the quarter-point move. , Bloomberg

(Bloomberg) -- The billionaire Hindujas brothers are looking to increase their stake in IndusInd Bank Ltd., the lender they founded, now that the Reserve Bank of India has eased ownership rules for the country’s private sector banks.

Ashok Hinduja, who chairs founding firm IIHL, said in a statement Saturday he’s waiting to act until details of the new rules are spelled out by the RBI, which is also the nation’s banking regulator.

“We eagerly await the operating guidelines as it gives the promoters an opportunity to inject capital to increase stake up to 26%,” he said.

While the RBI on Friday rejected a contentious idea that would have allowed big businesses to set up banks, the regulator did approve a raft of other proposals that included allowing founders to raise their stakes in private banks to 26% from 15%.

That new rule paves the way for more consolidated control of lenders like IndusInd and Kotak Mahindra Bank Ltd., which was founded by Uday Kotak, Asia’s richest banker.

Through their control of IIHL, the Hindujas brothers own 16.5% of IndusInd Bank, according to the most recent exchange filing. The regulator pushed back on an earlier request from the brothers to raise their stake.

“We believe this measure of increased promoter holding will be of benefit to all stakeholders: the regulator, the banking institution and its clients, particularly at this time when Indian economy is poised for exponential growth,” Hinduja said in the statement.